An internal EgyptAir flight en route from Alexandria to Cairo, was hijacked early this morning and forced to land in Cyprus. 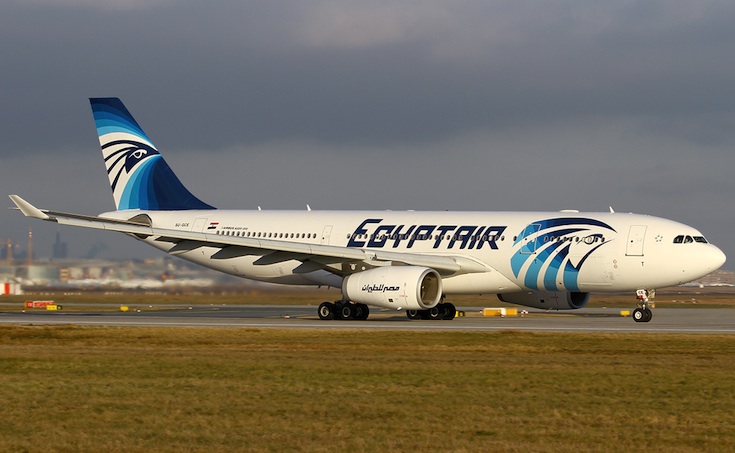 An EgyptAir flight with over 80 passengers on board, was hijacked early this morning, as reported by CNN. The flight, which was an internal one, heading from Alexandria to Cairo, was diverted to Cyprus, where it has now landed at Larnaca airport.

A passenger strapped with explosives threatened the pilot of the airplane, said Egypt's Civil Aviation Ministry. According to Al Ahram, no demands have been made as of yet from the hijackers, and a crisis team has been sent to the airport.

Update: Following negotiations, all the passengers, barring the crew and four foreigners have been released.

Negotiations with the kidnapped result in the release of all the passengers, except the crew and four foreigners.

Update 2 [10am]: According to Reuters, the Egyptian state media has identified the hijacker as an Egyptian Ibrahim Samaha

Update 3 [10:10am]: Video emerges of a majority of the hostages being released, as well as a photo of the alleged hijacker on-board flight MS181

Update 4 [10:30]: Unconfirmed reports state that the hijacker was motivated by personal reasons. Demands political asylum and to deliver a letter to ex-wife in Cyprus.

Update 5 [10:50]: Al Arabiya reports that no explosives have been found onboard and also hijacker's estranged wife, Marina Parashkou, is to participate in negotiations.

BREAKING: Security sources: There are no explosives on the #EgyptAir plane hijacked by Egyptian https://t.co/hXtBOEjhTC #Cyprus

Update 6 [10:57]: According to the Associated Press, Cyprus President says hijacking is "not something that has to do with terrorism." The Hijacker is also reported to be a veterinary professor at the University of Alexandria.

Update 7 [11:40]: A spokesperson for Egypt has corrected the earlier, erroneous claim that a U.S.-Egypt dual citizen was the hijacker. They now say that Egyptian Seif El Din Mustafa is responsible for the hijacking. There is still some confusion as to how many people were on the plane with the Egyptian aviation ministry saying 55, Cyprus saying 72 and EgyptAir claiming 81 people were on the aircraft.

Update 8 [11:50]: Sherif Fathy Ateyya, the Egyptian Minister of Civil Aviation says there are still three passengers and four crew on the plane. Still no confirmation as to the presence of any explosive devices.

Update 9 [1:45]: Several people have been seen leaving the plane, including one person climbing out of a window. Meanwhile, EgyptAir has announced that it has another plane en route to pick up the passengers from Larnaca.

Update 10 [1:50]: Police now have the hijacker in custody and all hostages have been released with no reported casualties.