Three bombs targeted mobile service providers, while a fourth exploded outside El-Warak police station this morning.Two smaller bombs exploded at a bus depot, with another 3 bombs being diffused 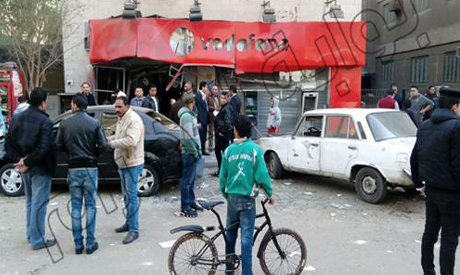 Once again Cairo has awoken to the news that multiple bombs have exploded in the capital, killing one person and wounding three others, according to a health official and police officer.

The bombs detonated outside two Vodafone offices and a Etisalat branch, an interior ministry spokesman told the AFP news agency. Two of the bombs exploded on two main avenues in the Mohandiseen area - Gameat El-Dowal street and Sudan  street - while a third detonated roughly the same time near a popular restaurant on the district of Imbaba's el-Wehda street.

It’s not exactly clear why mobile phone service providers were targeted, but Abdel Latif of the interior ministry said authorities had been on the alert for attacks in the run up to parliamentary elections next month. Thankfully the explosions went off while the branches were closed, and the bombs appeared to be rudimentary causing minimal damage and casualties.

It’s hard to tell exactly how many bombs have been planted this morning. At first they believed there was only three bombs, however a fourth bomb was detonated injuring six outside a police station in El-Waraq district in Giza, according to a security source talking to Al-Ahram Arabic.

There is no way of telling if Cairo is out of the clear quite yet, however whatever updates we find, we will add to this story.

[UPDATE] Al Ahram Online is reporting that two small bombs exploded on Thursday morning in a bus depot in the city of Aga, Dakahliya, but that a third had been defused. As it stands this bomb marks the sixth explosion to rock Egypt this morning. In total their have been 6 bombs causing one death and 9 injured. Updating the situation police issued a statement saying they defused 2 bombs in Ousim, Giza, bringing the total of three bombs defused thus far.

With most of the bombs discovered in giza and mohandessin area, we suggest avoiding these districts until the situation is under control.