ByBike Now Wants To Make Every Teenager An Entrepreneur

ByBike burst onto the scene as a couple cycling their little yellow cart around Cairo and selling batata to raise money for their wedding, but now, they want to give every Egyptian teenager a chance to be an entrepreneur. The crew dropped by our office at The Greek Campus to tell us more... 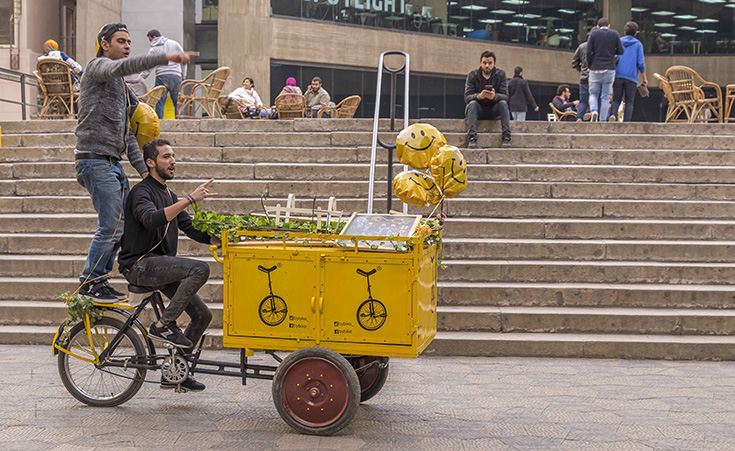 The name says it all; ByBike is literally a cute little yellow bicycle cart created by a young couple who cycle around Cairo selling seasonal treats, adding their own creative twist to them. Whether you want to go have tea or eat batata with Nutella, ByBike creates warm vibes on a cold winter's day. Started only a month ago, this innovative and adorable startup idea quickly went viral across social media with everyone wondering where the bike would show up next. The entrepreneurial couple initially launched their project as a means of raising money for their upcoming wedding. But now, their creative plans have expanded; they want to help students looking for jobs!

“As the co-founder of Triptanza, it’s unfortunate to say that tourism in Egypt is not doing so well. My fiancée, Noha, and I wanted to find another source of income to raise money for our wedding,” Ahmed El Sherbeny tells us. They decided to go back to basics and give people what they love…on a bike. Everyone knows that the tasty batata dessert is one of the best there is, especially in winter. However, Ahmed and Noha added their own twist to it: Nutella. They’ve created the Tabata! "We also serve unseasonal beverages such as watermelon and mango, because people actually crave it in winter. Aside from the juice, we also have a self serve spot for tea,” he tells us. However, every three months they change their menu to create diversity. ByBike is constantly on the move around Cairo; they post their upcoming location on their Facebook page for customers to follow. In addition, they create a personal relationship with customers by serving people themselves instead of hiring people to do it, and they also get help from friends - and even customers! - because they don’t want to turn it into a corporate business. “Even our customers are interested to help and serve others on the bike; they enjoy being part of what we do,” El Sherbeny explains. Expansion plans are currently in motion with new bikes being crafted. They already have arrangements set with Marassi, a few malls, and compounds. “We’re working on creating a set place in a Masr El Gedida garden that would have the same aesthetic as Lake Yard in Sahel,” he reveals. In addition, they’re going to have people vote for what they want on the menu next. You know those 10-second videos of mouthwatering cakes you see online that you always say you’ll try someday? We’ll someday is here because ByBike is willing to make them. We know, exciting! You can suggest what you want them to make, and if votes are high, you can actually get what you want! “We give the customers what they want and like to involve them,” says El Sherbeny. And they've taken involving their customers one step further, by letting them get involved entrepreneurially with ByBike. As a student, it’s tough to find a job or even a part time job that would fit with your college schedule. One option is to inform them when you're free and stand for an hour or so to make some cash. However, they’ve created another solution too, helping people promote their startups or ideas. “People can franchise and do what they love; they can sell books or jewellery…anything really. Surprisingly, 6,500 people have applied already and some ideas were ingenious,” El Sherbeny reveals.  "Looking at the bigger picture, if the government pursued this project, our economy could rapidly rise." The way it’ll work is; each person would rent a bike for a couple of months (duration is up to them), and ByBike won’t brand it. "They’ll choose the colour, and we’ll create a fan page on Facebook for them and promote on our Instagram, to help them get recognition,” Elsherbeeny explains. "They can name it whatever they want, and we’ll number all the bikes,” he explains.

We can't wait to see what kinds of goodies will be sold on the bikes! And of course, be on the lookout for ByBike; you never know when they'll hit your area. Happy hunting!