This week, the man with the metaphors, Nathan Anderith says it's a bee's world but it wouldn't be nothing, NOTHING, without a spider and its web... 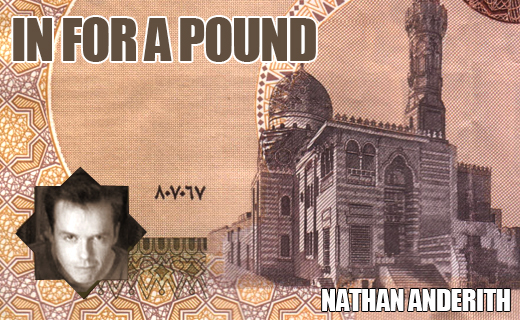 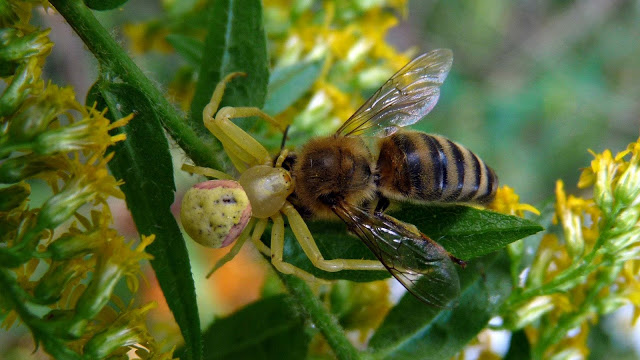 Let’s talk about spiders and bees. A spider lives and dies by its web. A living net of quivering ties; it’s his bed, his house, his office, his world. It keeps him from falling to the treacherous earth below. He spins his world from whatever spinning he’s got in him, then he tends. Like a tap-dancing gardener, the spider prunes and shapes, guiding his web to its most perfect and lucrative form. Does this strand bring him food? Does it give him influence or protection, the ear of a more powerful spider? Build it up then, spin it in stretchy steel cables holding fast – do a favour, give a bribe, remember names of wife and children. Does this strand cost him too much? Catching fewer bugs, victim to a fall from grace or a nasty rumour? Maalish, ya habibi, mumkin bokra, insh’allah. Snip snip, a little line falls away into darkness. The spider weaves, and thinks, and waits.

Bee’s got no time for that. Five grams of honey gotta be in by the end of the week. Already behind 1.3 from last week. First quarter numbers coming in, department’s throughput is short of projections - whole team’s gonna have to put in extra hours.  Gotta shore up hive walls in Sub-comb D, finish the pollination report, fill out worker bee evaluations and attend the company picnic. Always with the fucking picnics. Ducking out of the office today to make his appointment, to lie on a wax couch and bore the therapist drone with his mommy issues. Tough being the middle child of two thousand. But it’s okay, because he’s making his way up the ladder. Higher-ups starting to notice. Just gotta work harder – nose to the flower, shoulder to the wax. Time is honey, baby.

Maybe it’d be easier to get something done around here if you all would chill it with all the GODDAMN BUZZING.

Bees start showing up in the spiders’ nest. Some hear there’s honey to be found and bees bold enough, smart enough, greedy enough could live like queens. Others come as saviours, drawn by tales of poor spiders who eke by on barely any honey at all (commercials show spider children with eight big soulful eyes and distended bellies: “For just a milligram a day, you can give these poor hatchlings a better future…”). The funniest are the official bees, stern-faced representatives of the queen, opening embassies, supporting trade, making grand speeches, and every so often killing a shitload of spiders.

A bee on his first day buzzes in, shaking forelegs and mispronouncing names. He’s armed with mission statements and project plans and budgets, taming the future with an army of Word docs.

“Hey, guyz!  Great to be here. Gotta tell ya I’m zo exzited about working with you all and exzchanging ideaz and culturez and building zuztainable buzzinez models - az you maybe zaw on my ZV, I’ve got yearz of exzperience in crozz-cultural organizational team-building and ztakeholder communication, and I know if we zynergize, collaborate, and give 110 perzent, we’ll get this project done on zchedule and under budget, and have zome fun along the way.”

Man, this meeting would be a lot easier if I weren’t so hung over from all those fireflies last night.

Spiders listen in polite bafflement, nodding their heads and clapping when it is clear they should do so. Two in the back whisper.

“I guess he’s supposed to lead us.”

Spiders shuffle into staff meetings, stumble through team-building exercises. The trust falls are particularly unsuccessful. Spiders fill out official bee forms and timesheets and TPS reports, numbers spun from bullshit instead of silk. The bee buzzes in at eight every morning, eats at his desk, buzzes home at six. Nothing gets done the way the project plan foretells, reality bucks its reins. Optimism turns to confusion to frustration to anger. Every path he tries he’s met with obstacles, towering barriers that are more web than wall, letting him in a little, an early illusion of progress, with a momentum that slows, and slows, and stops.

I’m sorry, when I said come back tomorrow to get your form stamped, I actually meant die in a fire, you miserable waste of flesh.

At bee parties, he jokes about spider laziness and speculates on why they’re so much less developed than the bees. Is religion holding them back? Corruption? The heat? At work, he finally asks a spider for help getting a building permit that’s taking months. He is astonished when the spider plucks one strand – bing – and another strand – bong – and the permit is summoned like a snake to his song.

Exchanges occur. Spiders accept they live in a bee world with bee rules, and they spin their webs in between taking classes and starting businesses. Bees build their webs, and some learn the crucial truth that to make a strong one, it’s not enough to have good strands, you have to be a good strand. When understanding hatches, it’s never just from goodwill and patience. It takes a bee looking at a spider, a spider looking back, and each seeing each other, not a reflection of themselves.

The idea for this article came from my good friend Amro Shadi, the great cultural guru and dispenser of long-winded wisdom.