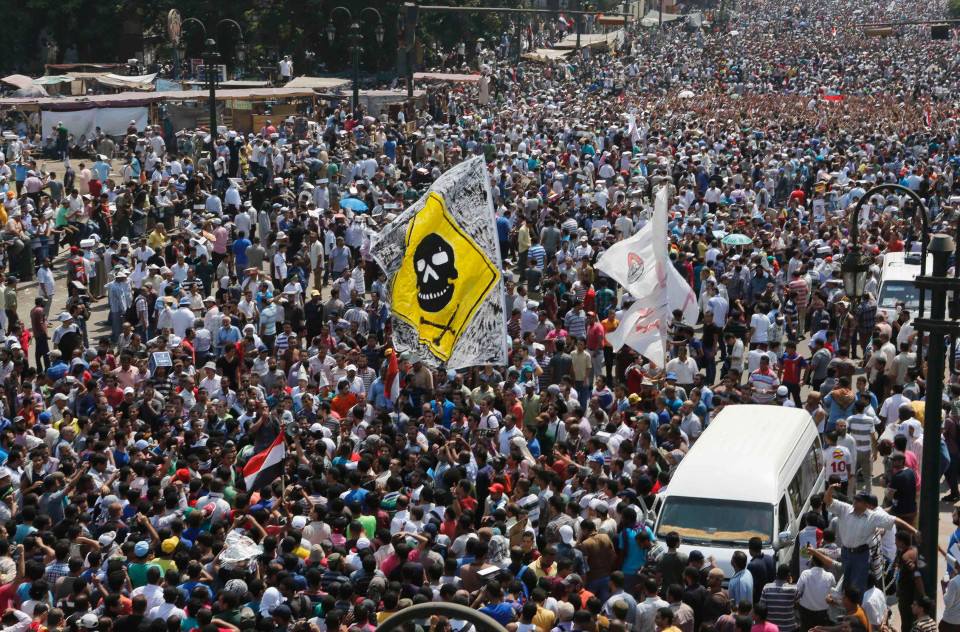 19:21 - Department of Health announces the death of 109 people today in in Egypt.

19:15 - Egyptian Presidency will host an "international press conference to clarify the reality of what is going on in Egypt". (Al-Hayat TV)

19:05 - Jordan joins Saudi Arabia in its stance towards Egypt. Al-Arabiya

18:39 - Five cars in Ramses Square with Al-Qaeda flags, distributed weapons a while ago to Morsi supporters... (Sky News Arabia)

18:34 - Military urges Ramses protesters to leave the streets as curfew goes into effect, saying they will react 'firmly' with those who won't abide.

18:33 - 24 members of the Egyptian police force have been killed since late last night across the country, a security official said on Friday, bringing the number of police killed in political violence to 67 since Wednesday. (Reuters)

18:30 - European Union foreign policy chief Catherine Ashton said on Friday she had asked EU governments to discuss "appropriate measures" that the bloc could take in reaction to the violence in Egypt. (Reuters)

18:22 - 7 were killed and 30 injured in violent confrontations in front of a police station in Damietta. (Al-Ahram)

18:22 - Reuters say 5 people were killed and 70 injured in Fayoum clashes between protesters and security forces.

18:20 - In the last 48 hours a total number of 54 churches were destroyed as well as dozens of Christians' homes and businesses. One of the oldest churches in Egypt, Virgin Mary in Minya, built in 4th century, was firebombed. (Via CBN)

18:09 - Morsi supporters burn Evangelical Church in Mallawi and 10 houses of Copts according to State TV.

17.46 - Father Joseph: We call on the military to intervene because thugs are attacking homes in #Minya.