Through this partnership, Khazenly’s customers and merchants will be able to access special privileges and offers from Lucky. 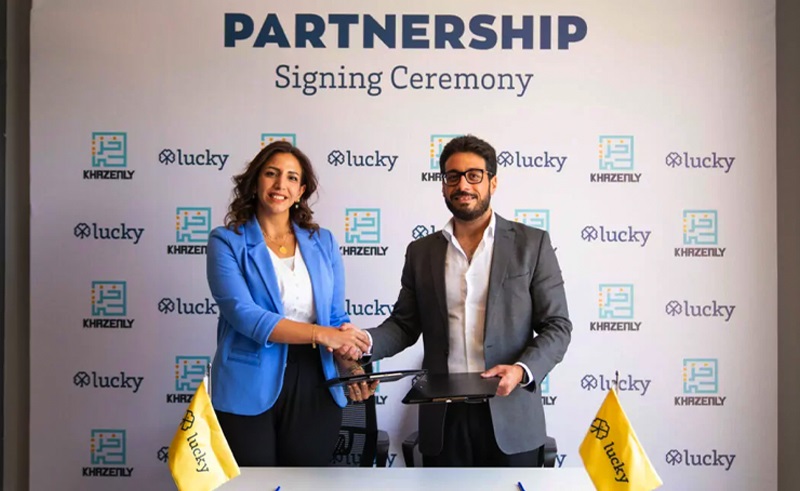 Lucky, an Egypt-based fintech app for credit products, offers and cashback rewards in the Middle East, has signed a partnership agreement with Egyptian on-demand warehousing and fulfillment platform, Khazenly.

Through this partnership, Khazenly’s customers and merchants will be able to access special privileges and offers from Lucky. An example of one such privilege is allowing Khazenly customers to benefit from the Lucky One card for free, which provides 5% cashback on any purchase with the option of paying in installments on the app.

“We are happy to partner with Khazenly, which supports facilitating the monetary transactions for Khazenly’s network of merchants and providing them with various financial services, as well as providing benefits to our clients according to their needs,” Antony Sobhy, Head of Business Development at Lucky, tells StartupScene.

Founded in 2018 by Momtaz Moussa and Ayman Essawy, Lucky is a digital rewards app that allows users to gain and redeem points for discounts on their purchases from over 20,000 local and international brands. Earlier this year, the startup raised $25 million in a Series A round to strengthen its credit capabilities and expand across the MENA region.

Khazenly also recently raised funding this year, having earned a $2.5 million Seed raise to further develop its products and services and increase its facilities across Egypt. Founded in 2021 by Mohamed Younes, Osama Aljammali, Mohamed Montasser and Ahmed Dewidar, the platform currently provides ecommerce merchants with an omnichannel solution to help digitize their fulfillment processes.

Fintech and ecommerce are some of the most heavily funded sectors in the Middle East. According to Magnitt’s 2022 Emerging Venture Market Report, over $2 billion was deployed into fintech startups, while $611 million was invested in ecommerce startups. This increase in funding is expected to continue throughout the year, with fintech startups already recording QoQ funding growth of 243%, and ecommerce startups growing by 63% since Q4’21.

The new funds will be used to fuel the startup’s global growth, as in-person dining [...]
RELATED ARTICLES