UPDATED: Explosion On May 15th Bridge Near Zamalak Exit

Eyewitness reports are emerging about a bomb going off in Zamalek. 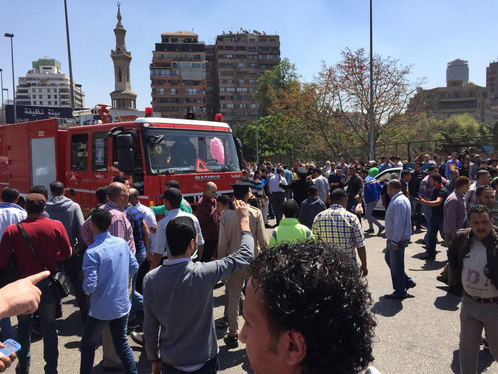 Zamalak residents are on high alert as several reports suggest that an bomb has detonated near the Zamalak exit on Cairo’s 15th of May bridge.

The incident occurred this morning and according to eyewitnesses and at least one person has been injured.

Reporting on Twitter is Sharif Abdel Kouddous, an Egyptian-American journalist based in Cairo, who works as a correspondent for Democracy Now! He is on the scene, and if you are looking for updates will likely be the best source at the moment, as he is there right now tweeting pictures.

Bomb on May 15 bridge. Police on scene say one policeman killed. Ambulance and fire trucks on scene. #Egypt pic.twitter.com/eLMky1yec5

Witnesses say bomb placed under small police kiosk on bridge. Photog says he saw leg of victim on opp side of bridge pic.twitter.com/elSs7VY7ZN

UPDATE: (A health ministry spokesman tells Ahram Online that one person has been killed in the explosion.)

UPDATE: Ajnad Misr has claimed responsibility for the explosion, claiming the attack is part of a “retribution campaign" on Monday. An alleged founder of the militant group was killed in a poice raid on Sunday and explosives and cell phones (used to set off bombs attached to cars) have been confiscated.