Strangely cute cartoon campaign posters have been popping up across Southern China, warning citizens of bearded men with money and swords. 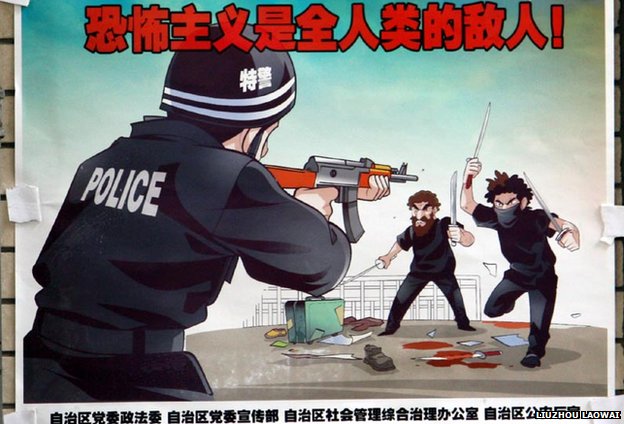 Across Southern China, cartoon-esque posters have been popping up warning citizens against helping terrorists, all of whom, are of course, bearded. The images have been posted in public places in Liuzhou, a city located in the south-central Guangxi region. Local blogger Liuzhou Laowai spotted the posters, and brought them to the attention of the world, describing them as "crude" and "racist" due to the fact that they are displaying images of stereotypical of ethnic Uighur militants from them Xinjiang province who have been blamed for several deadly attacks across China recently, and who also happen to be mainly Muslim.

The posters depict various confrontational images such as police officer facing off against two bearded men brandishing swords (swords? Really?) and reads "Terrorism is all mankind's enemy." Another warns against helping suspects to flee the country, showing a citizen dialing an emergency number as a minibus driver accepts money from, again, bearded and suspicious looking men, carrying the slogan "Helping terrorist flee the country is a crime."

The Xinjiang province has made news as of late after Chinese authorities banned Muslims in certain occupations (civil servants and teachers) in the area from fasting during Ramadan. The largely Muslim Uighur people feel they have a right to Central Asia and object to the mass immigration of Han Chinese into the Xinjiang province as well as the diminishing of their rights, which has manifested itself in a series of attacks across the country at various public spaces.

Beijing, however, does not support the Uighur's claim and says that they are trying to establish an independent state through terrorism. Currently, several neighbouring provinces have been offering massive rewards for tip-offs on terrorist activity.