In this exclusive interview, May El Habachi speaks to CEO Sky Kurtz about the company’s rise and raise, and how they're leading the charge to bring the future of farming to the MENA region. 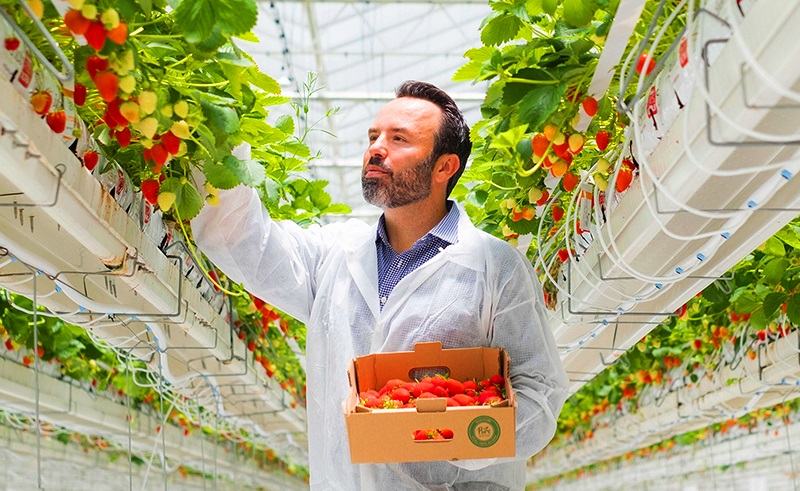 Plagued by drought, extreme heat waves, and water scarcity, the Middle East suffers from a myriad of environmental challenges, all of which add up to a prominent food security problem. And with climate change beating down, it is becoming imminent to find sustainable solutions to produce more food in an environmentally friendly way.

In light of the challenges of the region, agritech has been attracting the attention of investors in recent years. Egyptian startup Mozare3 raised over $1 million in May 2021; Saudi-based Red Farms raised $18.5 million in April 2022. One company in particular however towers above the rest. In June 2022, UAE-based Pure Harvest raised $180.5 million in its biggest ever fundraising in June 2022, bringing the company’s total funding to $387.1 million - making it one of the most funded agritech startups in the Middle East.

Pure Harvest uses a smart and high-tech greenhouse to grow fresh fruits and vegetables year-round in one of the harshest desert climates in the world. Based in the UAE, Pure Harvest was founded by Sky Kurtz, a former investment professional turned entrepreneur, and his partners, Robert Kupstas and Mohamed Adli, who saw an opportunity to transform the region’s agriculture by producing food more intelligently and at less cost.

“We have developed a bespoke growing system, both the technologies and the know-how to operate and maintain it, that enables us to measure and control every variable in the growing environment – heat, humidity, air movement, water, energy, pressure – everything, allowing us to produce optimal growing conditions for our plants,” Kurtz tells StartupScene. “We battle the environment so that our plants don’t have to. Then we let nature run its course, and the outcome is extraordinary quality, pesticide-residue free fresh produce with world-leading yields.”

Launched in 2017, Pure Harvest was co-founded by Sky Kurtz and Robert Kupstas who met in the UAE through Stanford University’s alumni network in 2016. Mohamed Adli joined the team later that year. “We founded Pure Harvest Smart Farms with the goal of providing year-round, safe and sustainable production of premium-quality fresh fruits and vegetables anywhere,” Kurtz says. “With a keen focus on serving import-dependent nations that suffer from inhospitable climates.”

Unlike most traditional greenhouses, Pure Harvest’s facilities use smart tech to remove heat and humidity from the air. Humidity is then converted to water for the plants, which are grown hydroponically in nutrient-dense solutions without soil. The plants are also monitored by sensors to measure all aspects of their health, including nutrients and temperature.

“Our climate management system provides pressurized air escapes for all ‘openings’ which resist external pesticides and insects entering the hybrid greenhouse,” Kurtz explains. “Further, we take advantage of carbon dioxide ‘dosing’ which stimulates photosynthesis and an advanced hydroponic irrigation system that allows for the recirculation of excess water.” These innovative solutions allow Pure Harvest to grow produce that cost 20% to 40% less than imports of comparable quality. Today, the startup produces 14 types of leafy greens, two varieties of strawberries and 26 varieties of tomatoes.

GETTING OTHERS ON BOARD

Despite the startup’s success in attracting investments and establishing its smart farms, it had other challenges to overcome: getting a major retailer on board. “Early on, when we began to supply a major regional retailer, they were rejecting our produce upon arrival.  We could not understand why,” Kurtz recalls. “The product was vine-ripened, high-quality, sweet, well-packaged, and being supplied within hours of harvest. We objectively knew this was superior quality to alternatives in the market.”

He soon learned that the person on deck was instructed to reject the tomatoes that were bright red for fear that they would over ripen on shelves. “In hindsight, this made total sense,” explains Kurtz. “For more than 30 years, they have been importing products from all over the world. If the shipment was bright red, it was already too ripe and likely had damage, shrinkage risk or would over-ripen on the shelf, resulting in losses, quality issues, and unhappy customers.”

To remedy this situation, Kurtz and his team introduced senior members of the retailer group to Pure Harvest to show them how food is grown on the farm and to get them comfortable with accepting future shipments. The end result was a success.

To date, Pure Harvest has four indoor temperature-controlled farms in the UAE, one in Saudi Arabia and another under development in Kuwait. The startup is also eyeing expansion in southeast Asia, particularly through its joint venture partner PlanTFarm in South Korea.

Using high-tech innovative solutions is not only important for growing food efficiently and economically; it is also necessary for withstanding the effects of climate change. “With the effects of climate change, unfortunately, more of the world will witness irregular weather patterns, droughts, extreme temperatures, and other calamities that render traditional farming methods unsustainable,” says Kurtz. “We believed that an economical solution that can be deployed at a very large scale was needed to overcome these challenges.”

One of the many effects of climate change will be water scarcity. The World Bank estimates that climate-related water scarcity will cost the Middle East 6% and 14% of their GDP by 2050, due to water-related impacts on agriculture, health, and incomes. They also report that the Middle East and North Africa import 50% of its food, while the GCC imports between 80% and 90% of their food. All numbers which illustrate the potentially disastrous effects climate change would have across the region.

“Over the past two-plus years, due to the pandemic, the need for our solution has become more apparent as we have all experienced significant disruptions to the global food production and supply chains, together with an increasing global focus on de-carbonization,” says Kurtz. “We are driven to reduce the world’s dependence upon carbon-riddled supply chains and a few massive food-exporting nations, like China and the U.S, and instead provide food security to those who wish to develop their incumbent farming industries, deploying large-scale, high-tech, resource-efficient food production systems to enable year-round production right within their own borders. We are pioneering the way for agritech companies by showcasing the use of technology and how it can help support a more resilient food system. The future of farming is here.”