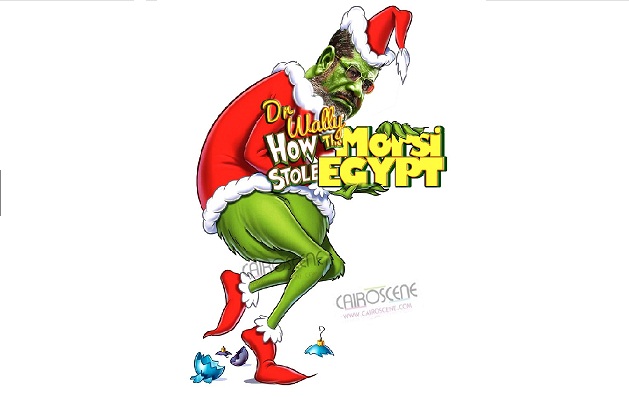 The Morsi hated Egypt! Yes, he was such a heathen!
Now, please don’t ask why, no one quite knows the reason.

It could be his beard wasn’t screwed on just right,
It could be, perhaps, that his pants were too tight,
But I think that the most likely reason of all,
May have been that his brain was simply too small.

But, whatever the reason: his beard or his pants,
He would take Egypt by force and leave nothing to chance,
Staring down from his palace with a sour Ikhwan frown
At the warm lighted windows, below in the town.

Electricity was depleting, Cairenes were cold in their bed
“Why are they complaining? Just wear cotton instead!”
No one was happy, he spread ignorance and fear,
Then he put up the taxes on gas, cigs and beer.

He snarled and he frowned because they went out at night,
It made him so angry, “What a horrible sight!”
He conspired and thought in his dark dingy den:
“I know what to do, I’ll close all shops at 10!”
People got angry which he thought was quite odd,
So he put out arrests for those who didn’t believe in God!

The radio and the TV were buzzing with rage,
So he went outside the palace and constructed a stage.
He gathered his beards by car and by bus,
They were paid by the hour so they wouldn’t make a fuss.
The beards chanted and cried, what a great sight he saw,
But behind all the cheers he was applying Shariah law.

“I know just what to do!” the Morsi laughed in his throat,
And he made a constitution which the bearded ones wrote.
And he chuckled, and clucked, “What a great Morsi trick!”
With his pants and his beard, how cunningly sick!

As he looked down at protests he snarled with a sneer.
“I don’t care what you’re doing, I’m already here!”
Then he growled, with his Morsi fingers nervously drumming,
“I MUST find some way to stop this, the liberals are coming!”