Jews Face Off Against Muslims in Backgammon Battle in Jerusalem

The 100 year competition is played out in the latest of a series of cultural and social gatherings, Muslim and Jewish Jerusalemites got together for a friendly game of backgammon. Plans to turn the local competition into a regional championship. 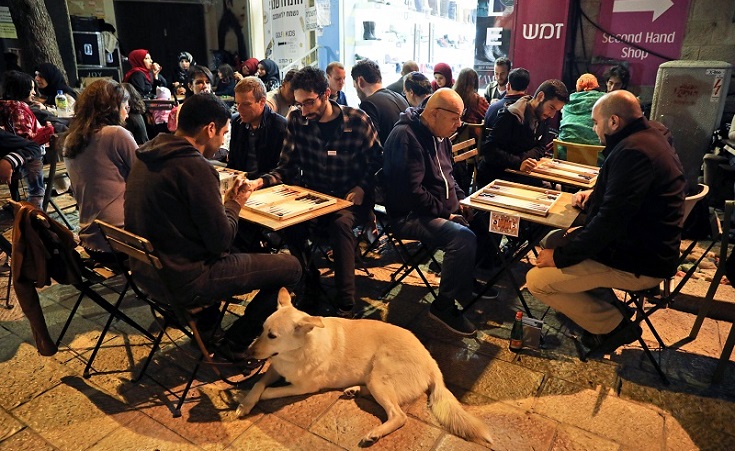 When Jews and Arabs get together, it is either to exchange bullets and insults or argue over who makes better falafel and dill pickles. Last Monday was a different story; a divided Jerusalem was briefly united, as the old city’s residents stepped out of the perimeters of their segregated neighbourhoods for a friendly game of backgammon.

The competition was organised by Double Yerushalmi, a group whose main mission is “to build closer ties between Arabs and Jews through cultural activities,” according to a news report by Reuters. "The city is segregated in many ways, so we wanted to create some crossover between neighbourhoods," Double Yerushalmi organiser Zaki Djemal says. "Politics is not at the centre of this, but it's around."

And even though the competition culminated in an all Jewish final, no casualties were reported, no foul play calls echoed through the streets of the old city, instead, Muslims took Jews to school over a round of Dabke dancing.

The friendly backgammon competition is the latest in a series of such cultural social gatherings to be organised by Double Yerushlami, half of which took place in Muslim neighbourhoods and the other half in Jewish ones. The Shesh Besh (or Tawla) showdown took place in downtown Jerusalem and saw around 50 players from both groups participate. However, Djemal wishes to expand the local event into a regional championship across Mediterranean countries by the end of this year, allowing players from Morocco, Turkey, Egypt, and Jordan as well as participants from across Europe to come to Jerusalem for the backgammon competition.

And in case you were wondering, Jews won, but with the competition is becoming a regional affair, there's a chance for our trained Egyptian tawla players to achieve victory!