Justice Gets a Red Card

As those charged with the murder or manslaughter of football fans in the Port Said Massacre face retrial, Eihab Boraie argues that the justice system is still ignoring those who need to be reprimanded. 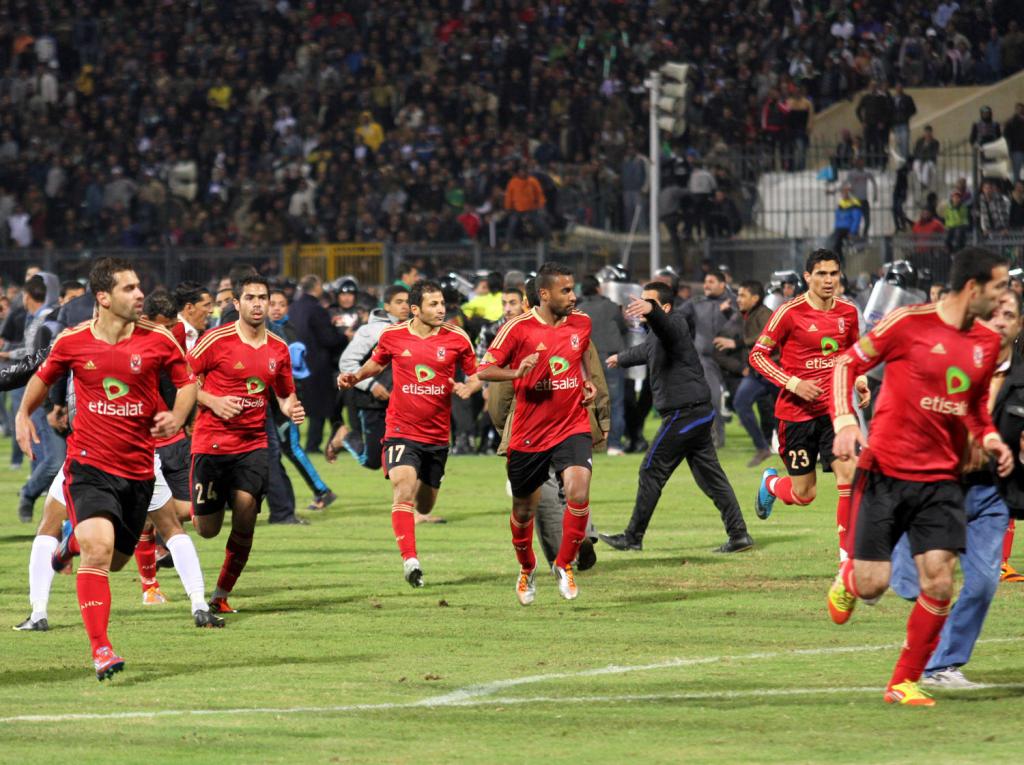 Egypt is lost in a revolution filled with dark days and few, if any, achievements. One of the darkest days since the people demanded a better and new Egypt was the football riot in Port Said in 2012. The shameful incident left 74 people dead, many injured, and essentially left fans banned from attending future games, as well suspension of the season. The question of who is responsible for the incident is still shrouded in conspiracy theories. There are those believe that the El Masry or Ahly fans were responsible, others believe it was hired thugs loyal to Mubarak's regime, but anyone with a rational mind would blame the failure of security forces who failed to keep anyone, including the players on the field, safe. In the end the court came to a decision that it was mainly El Masry fans fault to the stupid rejoice of Ahly fans. 21 people were sentenced to death, 24 defendants, including only two policemen were given sentences ranging from one year to life in prison. 28 other defendants, including seven senior security officials were acquitted. However, after a review, it has now been announced that 64 of defendants, including those who were acquitted will be given retrials. This decision may lead to the previously acquitted finding themselves sentenced or may lead to a possible easing of those previously sentenced.

While a retrial is a step in the right direction, it still fails to hold the real culprits responsible, not to mention the absurdity of sentencing anyone to death. The incident occurred during a very tumultuous period of the revolution, when a lack of trust in authorities was prevalent. Most of the blame should be placed on the heads of the security forces. If they knew they weren't capable of providing security, then the game should have never been played. It seems absolutely ridiculous that the court would hold only two low ranking police officers responsible for the overarching failures of their superiors, as well as El Masry fans. And by the way, everyone knows that there are little if any fans of El Masry, as Zamalek and Ahly hold a monopoly over football supporters. In any case, if there is evidence showing fans resorting to unprovoked violence, then hold them responsible. Otherwise, leave the fans alone, as in the moment of panic, anyone is capable of resorting to violence, especially in the midst of trying to escape it.

The people who deserve the harshest sentences are the higher up officials who were responsible for organising security, not the foot soldiers who were put in place and given orders. How is it that, with this massive fuck up, the person responsible for organising security is not forced to resign let alone face trial? How is it that these irresponsible assholes aren't household names and made an example of to deter future authority figures from fucking up? The failure to hold this person responsible should have united both fans against authorities, as opposed to making it seem like Ahly won the battle against El Masry.

As always, the court system seems more concerned with finding the quickest scapegoat, as opposed to addressing what really happen and serving out you know justice. Two years later we are still unclear who is responsible and what their sentence will be. The only thing that has become crystal clear is that this country's justice system is failing, and without proper justice system there is no new Egypt, just the same old authoritarian state, guided by the unaccountable.