Anam Sufi explains the nature of the Syrian refugee crises in Egypt, calling on the Egyptian population to view their plight through a more empathetic lens. 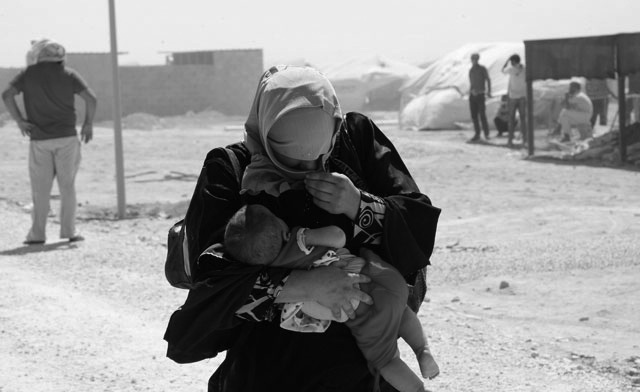 2011 is a year that has undoubtedly been etched in the historic narrative of the Middle East and North Africa as a climatic apex where the promise of a better future was amalgamated with the threat of rapid decline. Tunisia, Egypt, Libya, and Syria, the most prominent characters in the Arab Spring, witnessed revolutions that would forever echo and shape the face of politics, society, and economics in the region. While it is surely too soon to determine the wholesome implications of the political changes within each country respectively, global audiences, both learned and of spectator status, can agree that the most protracted situation concerns the continuing struggle for political stability that exists in Syria.

While there are already established institutions that concern themselves with the recording and analysis of events, what I seek to establish in this article is a call to trump humanitarian efforts over the political propaganda and greed-driven policies that have been adopted on both administrative and societal levels, in the context of Syrian refugees in Egypt.

Unlike in Egypt, where the combined efforts of the masses resulted in the toppling of ousted President, Hosny Mubarak, in only two and a half weeks, the Syrian rebel forces have not had he luxury of such swift change. Their continuing revolution is not characterized by peaceful marches that advocate civil disobedience; rather, it has been painted with the blood of civilians and forces from both sides of the conflict. The civil strife has marred the infrastructure of the country, evolved into a national state of civil war, and razed possibilities of short-term stability. Accordingly, millions of Syrians (and previous refugees from past Palestinian and Iraqi conflicts who had taken shelter in Syria) have had to mobilise in order to avoid life-threatening circumstances. In the wake of such a wide-scale humanitarian crises, Egypt was one of the countries to implement an open border policy that would allow the mass influx of refugees across its borders.

Against the backdrop of global politics and international law, when a receiving country allows a fleeing asylum seeker into its territory, a political statement is being made. We would all love to live in a world where the individual’s human rights and plight are considered at the heart of policy determinants, but to put it blankly, that is on par with wishing Cairo was clean.

The truth of the matter is that states and international law has been constructed with imperfections that enable, and at times encourage, the individual refugee to fall between the fissures of the foundation. We’ve all seen the Syrian populations on the streets of Cairo, the occasional tent erected to gather donations for the upcoming winter season, but I’m afraid that we’re also getting quite comfortable with the conformity of these things as being part of life’s everyday narrative.

The other day I was waiting on the street side for a friend of mine to pick me up, when a woman came by and began to speak in Arabic. Despite being a bit of a foreigner myself, I could tell that her Arabic was not of Egyptian dialect, which also meant that I had more difficulty than usual in understanding. I gave her a shy look and told her the token “no Arabic” line. However, you can imagine my surprise when the woman turned to me and asked in perfect English, “Are you looking for someone to help you domestically?”

What ensued after this was a conversation in which she related her tragic experience of having to flee her home in Syria, along with her children, to find sanctuary in Egypt. But amidst such statements, it’s imperative to scrutinise the nature and fallacy of the sanctuary that she was speaking of.

It being the middle of November, we are toiling towards the winter season. Some of us are replacing our summer styles for winter attire, posting images on #Instagram proclaiming our need to share that “black is the new black”, but the harsh reality is, others, much like this woman on the street, are frantically trying to secure means through which they can survive the winter and provide for their family. It’s noteworthy to mention that I am in no way censuring the indulgence of fashionista trends and lifestyles of more privileged status. Rather, I would like to draw attention to the failure of humanitarian efforts on the part of the Egyptian populous (generically speaking) to provide adequate aid to Syrian refugees. I realize that Egypt its self is a poor state, ripe with opportunities for philanthropy directed towards its own nationals, but I want to argue against the belief that pecuniary aid should be limited and filtered according to nationality.

To cite another personal example, I found myself having lunch with one of my friends the other day at Downtown in Katameya, when a couple of Syrian women approached us, timidly asking for money beneath their breath. In such moments, a plethora of thoughts flurry through my mind. Imagine experiencing a fall from the stratosphere to the streets, having to abandon a life of prestige and privilege in exchange for petty change. There are not two sides of the story; this is wrong. Just because poverty and bad luck is intrinsically entrenched in the scaffolds of history does not make it acceptable to ignore when faced with the opportunity to affect change. The friend who I was with immediately waved her hand in the air in an effort to tell the women to leave. Upon asking her why she had shown such hostility, she agitatedly said;

“Because the Syrians are going to fucking destroy this country. Fucking Morsi allowed them in, and they should all go back to where they came from!”

You’re probably thinking, ‘woah there, the writer of this article associates herself with some pretty bitchy people’, but the fact of the matter is, this is a sentiment that is vastly popularized in the midst of Egyptian society. I’m not naïve to say that there is no added threat of “increased competition” in the labor market, however, perhaps the situation is better viewed through a telescope of alternatives. In response to my friend’s comment, there is but one alternative to consider; a closed border policy is on par with signing a death warrant that keeps Syrian civilians trapped in an environment of life threatening turmoil.

It is easy to dismiss the matter in view of national amortization, but to seriously consider the implications of favoring one group of unfortunate people over another, on the merit of nationality alone is alarmingly reticent of the governmental and political policies that many of us like to pretend we repudiate.

The term humanitarianism has been defined, as “an ethic kindness, benevolence, and sympathy extended universally and impartially to all human beings.” It’s disconcerting that I feel the need to stress on the obvious in that nowhere does this definition discriminate on the basis of nationality, as the fundamental component to consider is that it addresses human beings.

Lest we forget, Syrian refugees are human beings, much like you and I. Accordingly, I urge you to check any preconceived and indoctrinated filters that prevent acts of kindness and extensions of help, financial or otherwise, unto a group of people who are so desperately in need of man’s most valuable characteristic; empathy.