Tunisian women are apparently flocking in their hundreds to Syria in a bid to provide a little sexual healing to Islamist fighters battling the Assad regime... 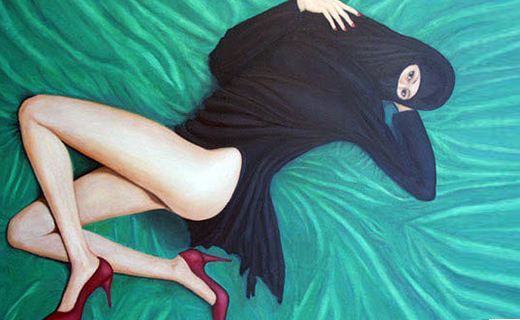 In an article named Visions & Sexual Jihad, we talked about rumours spreading on Facebook about a new form of Jihad, a 'sexual jihad' to be exact. Well it turns out sexual jihad has gone from rumours to reality in Syria.

Perhaps Tunisian women didn't get the memo that 'sexual jihad' isn't really Allah's will, but who are we to stipulate. Recently, Tunisian women have been travelling to Syria to help comfort Islamist fighters battling the Assad regime. A jealous Interior Minister, Lotfi Ben Jeddou, told MPs, on Thursday, that these women, “Have sexual relations with 20, 30, 100 militants. After the sexual liaisons they have, in the name of 'Jihad al-nikah', they come home pregnant.”

Of course the minister didn't elaborate on how many Tunisian women have returned pregnant with militant children. Apparently, Sunni Muslim Salafist believe that Jihad al-nikah, permitting sexual relations with multiple partners outside of marriage, is a legitimate form of holy war.

While many Syrians are fleeing in the millions, thousands of young Tunisians have been trying to get in. “Six thousand young people have been prevented from entering,” according to Jeddou who has been in office since March.

The whole concept of Jihad al-nikah is absolutely ridiculous. If we are to be honest, sexual frustration would only make militants angrier and more likely to kill. It makes very little sense that releasing this frustration will make them better soldiers. We're pretty sure the saying goes Make Love Not War, but it seems to have been changed in Syria to Make Love Then War.

Maybe the polish woman we wrote about in Polish Woman Opens Up To Egypt, intends of having sex with 100,000 men not for sexual reasons, but because she believes in middle eastern struggles. Aren't her plans suspiciously similar to those who believe in sexual jihad?