'Stay in Your Country' Says Racist French Politician to Egyptians

“I love Egyptians as long as they stay in their country,” says Fascist Marine Le Pen to a perturbed audience during her four-day visit to Egypt. 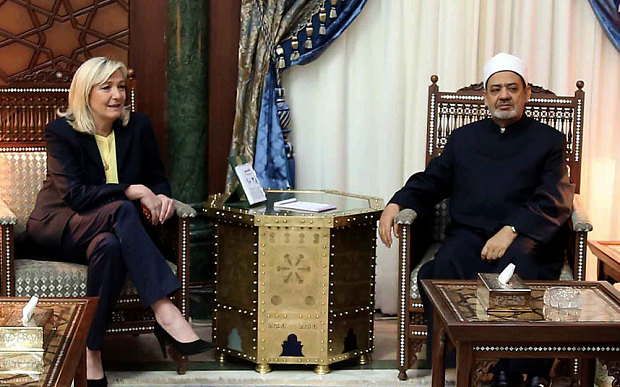 Dubbed the most racist person in France, far right leader of the National Front, Marine Le Pen arrived in Egypt on Thursday for a four-day visit where she met with political and religious leaders. Running for upcoming 2017 presidential elections in France, Le Pen stated the visit did not change her views on Arab and Muslim immigration to France, “Egypt, for us, is the castle that will protect us from immigration to France.”

Later, Grand Imam Ahmed El Tayeb criticised the National Front during the meeting with Le Pen for its views against Islam and urged Le Pen to review the party’s, “hostile opinion towards Islam and Muslims.” Following the meeting Le Pen stated that she had found common ground with the Azhar institution in the need to combat extremism. Le Pen also met with Coptic Pope Tawadros II where she said that her meeting represented solidarity with Christians in Egypt and The Middle East.