Syrian Dad Stones His Own Daughter to Death 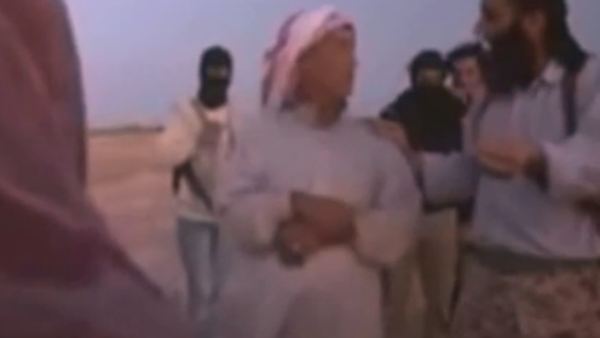 A heartless Syrian Dad teamed up with ISIS thugs to stone his own daughter to death.

The Syrian Observatory for Human Rights released a video showing ISIS terror nuts stoning a woman to death in the presence of her father after she was accused of adultery.

The video was supposedly recorded in Hama, where ISIS  showed the woman pleading to her father for forgiveness. Shockingly the man refused to forgive his offspring until two ISIS militants pressed him to do so.

One of the terrorists then clinically attempts to tell the innocent woman why she had to be “stoned,” before claiming that she would set an example for other women not to practice adultery.

In the video the unidentified man says: “This punishment right now is a result of your action you chose. No one forced you, therefore you need to accept God’s law, and to accept and submit to God. Islam is submitting to the will God. Do you accept God’s judgment?”

The woman simply nods. Sickeningly the woman's father then ties her to a rope he was holding and drags her to a pit where she is stoned to death.

SOHR reports claim that the man was later seen joining militants in the barbaric practice. The display is the latest attempt by ISIS thugs to enforce their stringent laws on the Syrian and Iraqi population.