Thursday evening there was an attempt by supporters of President Morsi to burn down the HQ of the youth movement Tamarod. 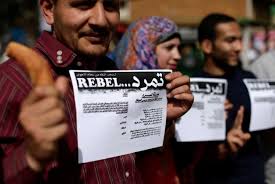 The fire was quickly put out before it had a chance to reach any of the petitions.  It is clear the supporters of Morsi and the government themselves have become increasingly worried about this campaign and a spate of arrests have occurred against well known revolutionary activists over the past week in order to dampen the effects of the proposed June 30th protest.

As of last week Tamarod claimed to have had over 7.5 million signatures.

Morsi supporters have not been idle however. They have created their own campaign called Tagarod supported purely by islamist groups.  They in turn have announced a sit in on the 28th of June in front of the presidential palace, increasing the chances of a proposed peaceful protest turning violent.