Threats Close Multiple Embassies: Is it Time to Panic? 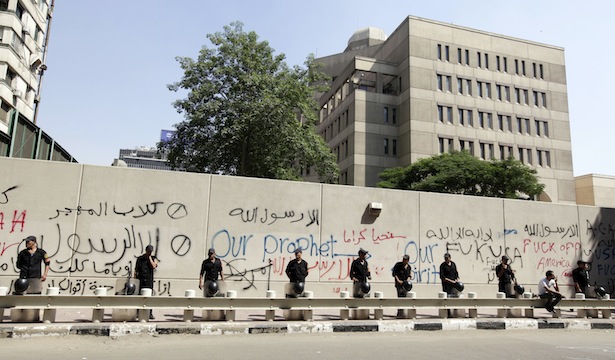 Once again Egyptians find themselves in the dark, as multiple embassies in Garden City have been closed due to an undisclosed security risk, leaving Cairenes and expats to wonder if some form of attack on the capital is imminent.

Fears of an attack began yesterday, when the British Embassy located in garden city decided to close their doors only citing “security reasons.” Fears started to heighten today when, following suit, the Canadian embassy also located in Garden City decided to close their embassy, again citing security reasons failing to provide any further details. A message posted on the Canadian Cairo Embassy website reads: "The ability to provide consular services may occasionally be limited for short periods due to unsettled security conditions." No other details have been given to explain the closure.

These closures where then followed by the Australian Embassy which currently remains open, however have updated their travel advice to citizens warning of reports indicating the possibility of an attack against embassies in the capital.

As for the American Embassy, they remain open. However, on Thursday they released a warning to its nationals saying that "in light of the heightened tensions and recent attacks on Westerners in the region" embassy staff were advised to stay close to their residences.

We aren’t exactly sure which recent attacks they are referring to. In the past, many embassies released travel warnings due to instability in Sinai which in February resulted in a terrorist attack claiming the lives of three Korean tourist aboard a tourist bus. By the summer most of the travel warnings issued as a result of this attack were lifted.

As it stands there have been no official statements issued by either Canada or Egypt about what or who is threatening the embassies; however that hasn’t stopped the media from speculating on the threats. Ahram Online speculates two theories from speaking to an unnamed embassy source. The first theory is that the closures may be a the result of unknown political tensions, while the other theory is that a security threat has actually been made against the embassies or the area. Some suggest it could be a reaction to the acquittal of Mubarak, which most of the world sees as a farce and could reignite protests, which is why Tahrir was closed to the public the past couple of days, but has since been reopened. Also who could forget ISIS and their radical offshoot supporters like Egypt’s Ansar Bayt Al Maqdis who continues to make threats and spread terror in Sinai, but have so far failed to bring their war to the capital.

We could theorise forever why alarm bells are ringing, however Egyptians have become accustomed to daily threats that often amount to nothing. All we know for certain is that taking precautionary measures never hurts, and that avoiding Garden City and areas that house embassies should be avoided until there is further clarification on how serious these security concerns really are.