Video has emerged of the assassination of Russia's ambassador to Turkey, Andrei Karlov, who was shot and killed Monday during a speech at an art gallery opening in Ankara, Turkey. 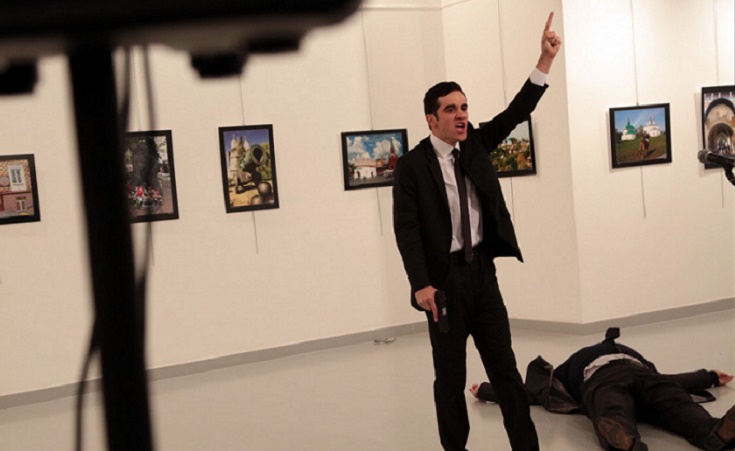 Terror strikes Ankara as video emerges showing the assassination of Russia’s ambassador to Turkey, Andrei Karlov, while attending an art gallery opening. According to Russian officials the ambassador has died from his wounds, and local Turkish station NTV are reporting that special forces have killed the gunmen responsible, leaving three others wounded in the attack.

The assassination was captured on camera as the 62-year-old ambassador was shot in the middle of a speech.

Immediately after the assassination, Turkish special forces surrounded the building and shortly thereafter killed the gunmen according to Turkish station NTV report. Although details are still emerging many media sources including the AP photographer who captured the video, report that the gunmen was dressed in a suit and tie and shouted “Allahu Akbar” before firing multiple shots.

According to the AP live report, the gunmen shouted in Turkish "Don't forget Aleppo! Don't forget Syria!" The man then yelled: "Stand back! Stand back! Only death will take me out of here. Anyone who has a role in this oppression will die one by one."

A photograph emerged on twitter showing the gunman in a black suit holding a pistol, standing close to a podium in the art gallery with what appears to be the ambassador laying on the floor.

The attack took place just a day before a meeting of Russian, Turkish and Iranian foreign and defense ministers in Moscow to discuss Syria, as Russian and Iran continue to support Assad, while Turkey continues to support its Assad's foes. It is unclear at this time, exactly the motive of the gunmen, however, an investigation is currently under way and we will update this story as more details emerge.