A fire erupted in a hotel in Downtown's Ataba neighbourhood early this morning, leaving at least 27 injured. 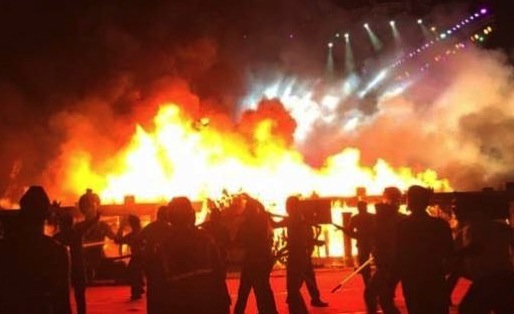 More than 25 fire trucks were rushed to Al-Rowa’i area in Ataba’s Al-Mosky in Downtown Cairo to put out a great fire that erupted in the area according to Al-Watan.

According to Youm7, eyewitnesses have stated that Hotel Andalusia was set on fire in Ataba early morning today, causing the evacuation of the 6 storey-building. The fire rapidly spread to an adjacent warehouse building. Several store owners have claimed that the fire erupted due to the hotel’s negligence especially in regards to safety and the lack of fire extinguishers needed to evade fires. This resulted in the speedy spread of the fire among the neighbouring buildings and the burning of supplies worth millions of pounds. On the other hand, other dwellers of the area stated that the fire probably spread due to the carelessness of the furniture owners whose furniture caught fire which they could not control or put out, according to the same source.

Head of Ambulance Committee, Ahmad Al-Ansari has stated that the number of those injured from the fire has reached 27 people, 17 of which were transferred to hospitals and 10 of which were treated on site due to inhalation of the fumes, according to Al-Mojaz.

Major General Abu Bakr Abdul Karim, Assistant to Minister of Media and Public Relations has stated that there have not been any deaths because of the fire and that the firefighters have controlled the fire and ensured it does not spread to the neighbouring buildings, according to Moheet.