Who is Behind the Yellow Cart Lighting Up The Greek Campus?

The quirky yellow food cart which recently set up shop at The Greek Campus, has plans beyond selling banana and Nutella sandwiches; they aim to register the work of street vendors and help provide unemployed youth with a source of income. 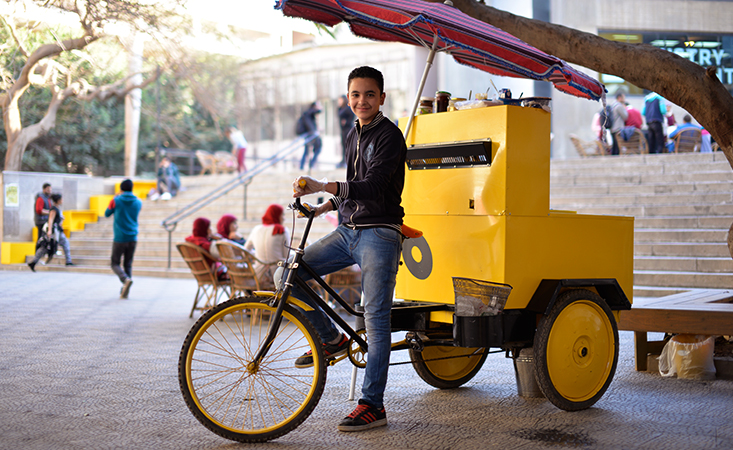 If we had to make a list of the things we see at Downtown’s Greek Campus every day, we’d run out. But between a gigantic Scooby Doo strolling down the stairs and fuchsia tutus, we couldn’t help but notice the quirky yellow food cart, cutely titled Bubblo, turning heads and mouths with its banana and Nutella sandwich. So we went up straight to Mohamed to hear the story behind the bike-tracked cart.

“I want to become the youngest businessman in Egypt.” We are taken aback. “I don’t want to work in only one business, I don’t want to specialise in a specific field but to do as much as I can,” says Mohamed, who is 17 years old but appears to be even younger. His words mirror the spirit of an initiative that stretches way beyond the boundaries of Cairo’s sensational tech hub, to spread the entrepreneurial spirit amongst the thousands of street vendors dotted across the streets of Egypt. “I want to become the youngest businessman in Egypt,” says Mohamed.

“My brother Ahmed and my cousin Mohamed El Arabi have always taught me to improve myself and open my mind to new businesses instead of just playing like the rest of the kids,” he goes on to explain. Mohamed el Arabi, his 38-year-old cousin, has come up with a project to support Egypt’s vulnerable street vendors, often subject to ‘baltageya’ gangs, whom they have to pay for protection from crime.

The project, entitled El Waleyat el Muta7eda li Sena3at Almashroo3at Alsa3’eera (The Arabian union for small businesses and manufacturers), aims at cooperating with authorities to legitimise and register the work of street vendors and manufacturing bicycle-tracked carts to help provide unemployed youth with a source of income. The project was supported by startup incubator Nahdet Mahrousa with a 50,000 LE fund, as the organisation supports social entrepreneurs with the potential to innovate and create sustainable impact to serve underprivileged communities. In a country where 26.3% of Egyptians live below the poverty line, the non-profit entity leverages on the power of local innovation to alleviate poverty and improve the livelihood of Egyptians.

“My cousin, who runs the project, works in many things. He is now creating several carts to help Egyptian vendors have a cleaner workspace while partnering with authorities to provide them with authorisation,” says Mohamed.

Though only a winter break holiday experience for the young seller, as he gears up to resume his high school studies, L Bubb is Mohamed’s first experience, as he runs one of the two first yellow carts selling honey, eshta and halawa sandwiches and other delicacies for us hungry dwellers of the ever buzzing Greek Campus.