Women Stand In Solidarity with Egyptian Detainees Outside Ittihadeya

Marking one year since activists were arrested outside Ittihadeya while protesting Egypt's anti-protest law, a few dozen women held a protest in the same place to call for their release. 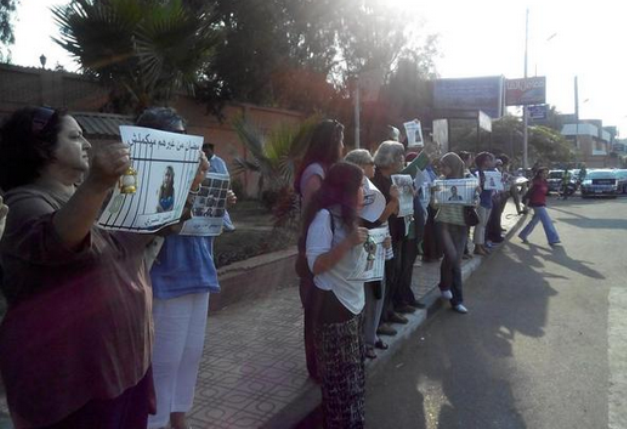 Protesting in Egypt these days takes a lot of courage, as the simple act of standing up for what you believe in can land you in jail. Refusing to accept the status quo, a few dozen women held a protest outside Ittihadeya presidential palace yesterday calling for the release of detainees.

Live tweeting from the protest was activist Mona Seif, who documented the event through social media, mentioning that officers had told them to stop, but that they remained for the entire hour as planned. The organisers tried to rally support for the demonstration on Facebook and called for action to mark “the International Day for Solidarity with Egyptian Prisoners” commemorating the one year anniversary since authorities arrested 23 pro-democracy activists for protesting the newly instated protest law. In December, the group were sentenced to two years in jail for violating the protest law and allegedly assaulting security.

Translation: Ramadan Kareem, but Ramadan can't be that without letting the ged3an (aka Egyptians) out of prison

The protest law is controversial to say the least, and despite calls for amendments, not much has changed. With no parliament in place to challenge its passing, it is a safe assumption that this won’t be the first or last time the protest law is put into question, and that activists will continue to call for the release of prisoners detained under this law.