In the wake of the shootings seen in Texas outside a 'Prophet Mohamed Cartoon Contest' one hard-line Dutch politician wants the Netherlands to host the exact same event... 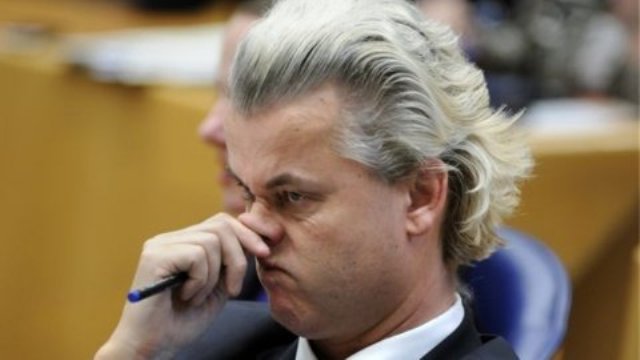 Islamophobia appears to be rising in the Netherlands, as Freedom Party politician Geert Wilders is calling for the staging of a parliamentary exhibition of the same cartoons depicting the Prophet Mohamed that recently resulted in a deadly shooting in Texas.

On Sunday, two gunmen planned an attack on a conference center in Garland Texas, which was holding the controversial cartoon contest. Before they were even able to enter the center the gunmen were killed by an officer. Soon thereafter, ISIS attempted to claim responsibility for the attack.

Considering how tragic this event could have been, one wonders why a Dutch politician believes that duplicate this event is a good idea. Trying to justify his position the anti-Islam politician told AFP on Wednesday that he was “going to request Parliament to exhibit the same cartoons as those that were displayed in Garland.”

The terribly offensive silver haired Islamaphobe believes that putting on the exhibit is a matter of supporting free speech. “I want to send a message that if you use violence to suppress free speech the only effect is that we’ll do it even more,” Wilders said, adding “we must show we’ll not be intimidated.”

For those in the Netherlands, Wilders statement doesn’t come as a shock, as the politician formed his own Freedom Party in 2006, which gained in popularity on an anti-Islamic platform. “I don’t want to provoke, but at the same time we must show that we’re standing for freedom of speech,” Wilders tells AFP. This is the same man who has no problems branding the Quran as a “fascist” book and comparing it to Hitler’s Mein Kampf.

Speaking of fascism this is also the same man who appeared on Dutch TV in March asking his party at The Hague if they wanted fewer Moroccans in the Netherland. Party faithful then responded by chanting “Fewer, Fewer!” leading him to promise that “we’re going to organise that.”