Seeing as everyone knows that Morsi’s Freedom and Justice Party stands for freedom and justice, they have decided to show us just how free and just they are by FORCING shops and restaurants to close early. 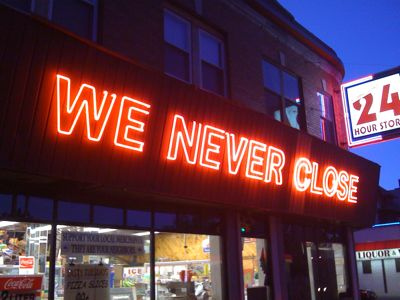 We blogged about this before but basically, the idea is to have shops have to close at 10pm and restaurants at midnight, to apparently save electricity. Apparently.

Despite the fact this policy might well lead to a massive blow to the economy, lessened security as no one will be out and about at and increased traffic, they seem pretty set on applying the laws.  Apparently, is not an option. Apparently.

Thankfully, after a brief bout of depression when Morsi was announced president, people are starting to stand up for their rights and speak up again the hodgepodge of ridiculous new laws being proposed. Business-owners around Egypt in particular have been very vocal about the new retail opening hours and we noticed a little hashtag floating around Twitter last night: #Mish7n2fl.

Started by Wel3a Cafe owner and all-round entrepreneur Amro Elfiky, the hashtag caused quite a stir in the Twittersphere. We spoke to the man himself, who, when we interviewed him a few weeks back, had quite enough of bureaucratic red tape. “A law like this, which will seriously affect millions of people, should only be applied when there is a running parliament. Which of course, there is not. This was a dictator’s decision,” he says.

“If you think about it, when 50 people are all in one place – a restaurant, a store or a cafe, for example – they are all using the same amount of electricity. When all of these people are in their own homes, we’re likely to be using more electricity,” adds Elfiky.

Now clubs and bars are categorised as tourist destinations and are exempt from the law. That means you can still stay out late – but do you want to if every policeman or busybody on the street will know that, if you’re out after midnight, you’re probably up to no good? Search #Mish7n2fl on Twitter to find out more.

Take our hand and join us on a long and painful journey of the dating life of a [...]
Week Month Year