A shocking video has emerged of a train station security guard attacking a young boy in Sweden. 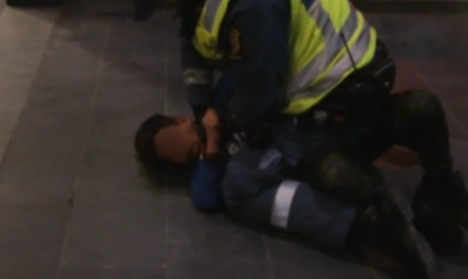 Another day, another heartbreaking story. And yes, there is, unfortunately, another one that is not coming from Libya but from Sweden today, however, with a much better ending.

Last week, a 9-year old Muslim boy was assaulted by a security guard after traveling without a valid train ticket. Yes, you heard that right: the boy was NINE and his offence was trying to run away when he was in danger of being caught for fare-evasion. While the security guard was sitting on his body, pressing his face to the ground and trying to immobilise him, the little boy was apparently scared to death as he raised his index finger to say the shahada. There is, of course, visual evidence of this, and the sight is not pretty.

The employer of the overreacting security guard, Anders Lönnebo, has admitted that what happened “doesn’t look good on camera.” It sure doesn’t, Mr Lönnebo. Apparently, the boy had been trying to bite the security guard which in no way lessens the the disproportional retaliation by the guard. Fortunately, the management is confirming today that the security guard is under investigation by the Swedish Police.

In a month where messages of Islamaphobic incidents and religiously-fueled attacks are making the rounds, it is unclear if the Swedish security guard was acting out of hate, however, it doesn’t affect the violence of his actions. We are hoping these news stories will cease coming in soon.