Left Wing and Kody have been garnering huge support since their formation in 2012, and we can't wait to hear them live at Omar Khayyam Boat on Friday the 2nd of December. 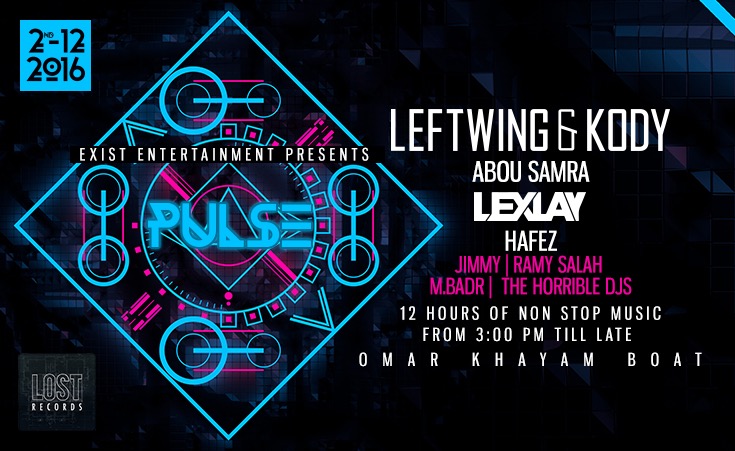 It's been a long autumn wait for Cairo's winter season to kick off. With the absence of the big players, we have been left in an international DJ drought, where most of the bookings are mediocre, lacking in substance and relevance. In comes Pulse with a 12-hour party hosting Left Wing and Kody, who've been garnering massive international support since their formation in 2012. The UK duo specialises in tech house, a very rowdy mix of drop down dirty beats, with a major hip hop influence. They released music on a massive number of labels – including Hot Creations, Exploited, Viva, Suara, Knee Deep in Louise, and Andre Crom's OFF Recordings – and their music has earned them residencies in Sankeys (Ibiza) and Fabric (London). Impressively, the duo was nominated for DJMag's Breakthrough DJ of the Year award just one year after they formed.Alongside the international guests  at Omar Khayyam on December 2nd is Spanish techno sensation Lexlay, along with a selection of Egypt's finest talents - both upcoming and established. Pulse is pairing their international booking with locals of varying degrees of fame, all of them masters of their craft - except the Horrible DJs; they truly suck. We don't even know why they're on this bill. Alongside the Horribles are upcoming talents Jimmy, Ramy Salah, Hafez, and M.Badr. Last and most definitely not least is famed Egyptian hero Abou Samra, one of the very few Egyptian DJs to reach international prominence and play clubs and festivals abroad.