This will be the first performance of the sensational hit in the Middle East and if that's not enough, Nicole Saba is burning up the stage as well. 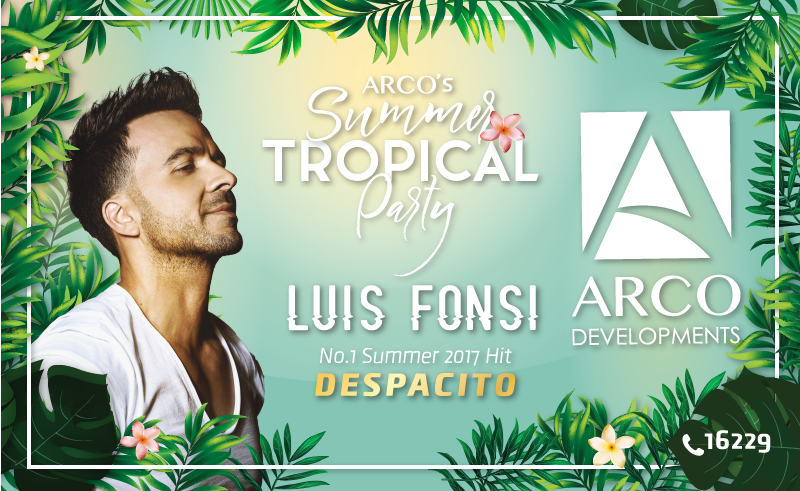 With more than 3 billion YouTube views, the Latin pop hit Despacito has been taking the world by storm since it was released earlier this year. It's now officially the most viewed video on YouTube. The Puerto Rican pop star behind it, Luis Fonsi, became an internet sensation and rose to international fame and stardom overnight. The viral song is on everyone's playlist and is hard to get out of one's mind. These are all quiet legit reasons to get us ecstatic about Fonsi's anticipated landing in Egypt's North Coast on August 11th for the Middle East's first ever performance of Despacito in ARCO Al Sahel Oasis, which is planning a one-of-a-kind event with many surprises (HINT: international flight tickets) and goodies up for grabs.

Having established itself as one of the pioneering real estate companies in Egypt since 2005, ARCO Developments has an impressive portfolio of projects like as Dyar Park, Le Reve, Royal Meadows in Cairo, and Oriental Bay Resort in Marsa Alam. Now, ARCO Developments takes to Sahel with the much-anticipated real-estate coastal star Citystars Al-Sahel. The luxury residential and entertainment complex, whose brand ambassador is none other than internationally renowned footballer Neymar Jr., will feature a world-class mall, 4 international hotels, and gigantic blue swimmable lagoons, with the event's first 25 buyers winning TWO tickets each to Barcelona to attend one of the unforgettable La Liga matches.

In addition to Citystars Al Sahel, ARCO is also taking over 6th of October with Lavande Province, which is a residential compound entirely covered with soothing lavender plants. New Cairo is also getting its very own La Fontaine, a compound where water runs from the gates and throughout the streets, making it the place to live for a tranquil and peaceful life.

And for more Friday excitement, children aged 5-15 will get to show off their dancing swag to the beats of Despacito for a chance to snap a picture with Luis Fonsi himself! And if that's not enough to get us all hot and bothered, the night will end with the Levantine pop princess Nicole Saba taking to the stage and rocking the night away with her mega popular hits.

Catch y'all on the 11th in ARCO Al-Sahel Oasis, it's time to DESPACITO!

For more info, call ARCO Developments on 16229 or find them on Facebook.