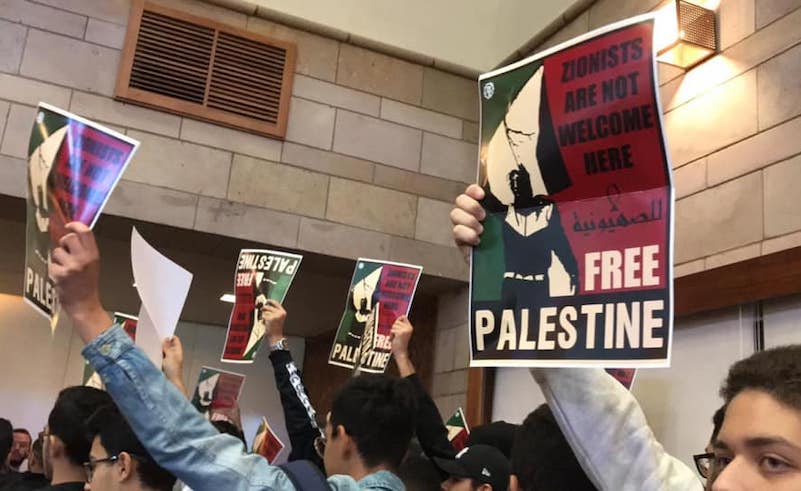 "Ya Amrekeya, ya Amrekeya, eh'na ded el sahyoneya," chanted the students at the American University in Cairo (AUC) yesterday. Their words translate to "AUC, AUC, we are against Zionism," and served as the sentiment behind their walk-out during a speech by the former US Ambassador to Egypt.

The walk-out was a collaborative effort between different student entities on campus, including the AUC Student Union and the AUC Student Rights Coalition. The students organised a gathering to attend the first minutes of the speech and then leave immediately as soon as Kurtzer started talking while holding flyers which read "Zionists are not welcome here" and "Free Palestine."

"Initially, when we found out the university was hosting this talk, we tried our best to explain to the administration that this is not something that can happen on our campus, especially given the recent attacks on Gaza. The administration argued that this is an academic project and just that," Vice President of the AUC Student Union Salma Ehab told CairoScene. "If hosting this type of conversation with these types of people aligns with the administration's political agenda, it definitely does not align with our politics as students and that's a distinction we wanted to make clear."

For the past month, several acts of solidarity with Gaza have been organised on campus by members of the student body following the recent attacks. These efforts included a silent stand in the campus plaza and an ongoing fundraiser.

"Earlier today, AUC hosted the American ambassador to the Israeli occupation during the second Intifada, who described the Palestinian resistance as a terrorist movement in 2010. Today the ignorance was no less than it was in 2010," the AUC Student Rights Coalition wrote on their Facebook last night. "As a student body, we stand and will continue to stand together to refuse the acknowledgement of any pro-occupation visits, talks, individuals or to afford them any sort of respect.."

The event, titled "Off the Record: The Future of the US-Egypt Relationship", took place in the presence of AUC President Francis J. Ricciardone Jr. and focused on how the current US presidential elections will impact the Middle East.