The secret's out - Absolut Elyx launches in Egypt with a big bang tonght at Tamarai. We got a special preview of the luxury vodka.... 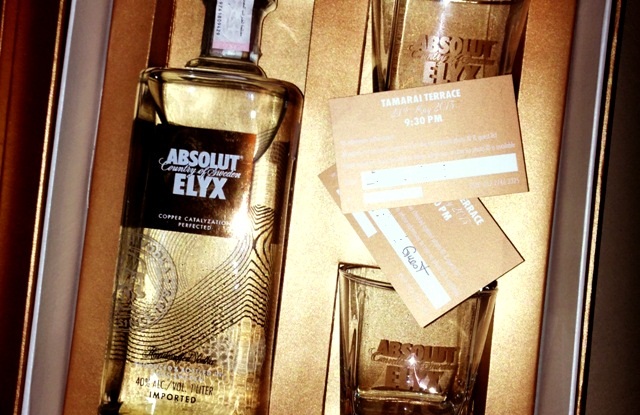 There’s been a lot of talk around town about some fabled vodka launch. There have been mysterious emails, secret packages and suspicious Tweets flying around, all tinged in shiny copper hues. Last night, the secret was revealed and, trust us, it was worth the wait. Cairo’s coolest media makers (we say that because we were invited, obviously) were treated to the first preview of Absolut’s new Elyx blend at La Bodega, which turned out to be the perfect relaxed location to sip as we learned about the impressive new vodka.

The evening began with a presentation by a suave Swede that goes by the name of Johan Ekelund and has over 12 years of experience in the alcohol industry. Absolut Elyx’s brand ambassador, he was our guide throughout the night, taking us through the origins of Elyx, how it’s made and what makes it so special. Turns out the wheat that they use to make Absolut Elyx (fun fact of the day: vodka isn’t always made from the potatoes) all comes from one constantly supervised field, and is distilled and bottled just around the corner, assuring quality control and consistency. Only four Absolut masters oversee the whole process, and every step in making Elyx is done by hand. So what’s with the copper theme? Well, here’s the science bit: copper is great for attracting undesirable compounds that naturally occur in the making of spirits. By distilling their vodka in a vintage copper column, Absolut are able to catalyse these compounds to achieve the pureness that makes Elyx so special. But pure vodka is boring and sometimes harsh and difficult to drink. The trick is to purify the vodka while keeping the compounds that give it character and that’s where years of Swedish expertise at the Absolut facilities come in to make sure the spirit is the 'liquid silk' their advertising promises.

After we got past the technical stuff, it was on to the taste test. We were presented with three unmarked vodkas and talked through how to drink vodka (fun fact of the day II: you’re not supposed to down it, run around and molest people). After tasting all three, the brands were revealed and the room of 20 or so people unanimously voted Absolut Elyx the smoothest and tastiest compared to the other two which turned out to be Grey Goose and Belvedere. So what have we learned so far? Copper and wheat are a match made in vodka heaven. The rest of relaxed night was dedicated to trying Absolut Elyx every which way – we were presented with glorious cocktails from summery sips made with grapefruit juice, to classic Absolut martinis, warmed with star anise, as Johan and the Absolut team talked us through the drinks.

We were promised a surprise at the end of the evening, and generous team did not disappoint. We all walked home with a gorgeous gift box filled with Absolut Elyx, cool glasses and last, but certainly not least, invitations to the big vodka-fueled bash that’s taking place on Friday 24th May on the infamous Tamarai Terrace.