Ok, he’s not really doing a concert in space, but can you imagine? 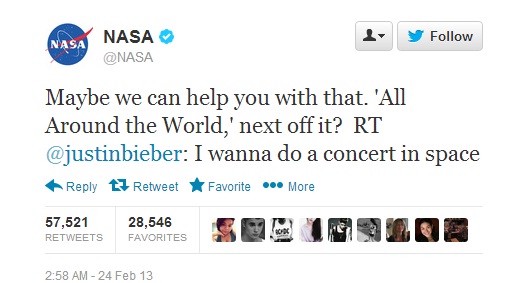 Justin Bieber is apparently one of the latest celebs to sign up for a trip to space on Richard Branson's Virgin Galactic. Bieber took to his Twitter saying: "I wanna do a concert in space." And to that NASA replied, "Maybe we can help you with that." In your face, Morsi!

It is said the Virgin Galactic’s passengers will be sent 62 miles up in altitude. We know what some of you are thinking. We just hope Leonardo DiCaprio isn’t on the same aircraft as Bieber.