Its Graffiti's second birthday and you are invited to the Four Seasons Hotel Cairo at Nile Plaza's nightclub. 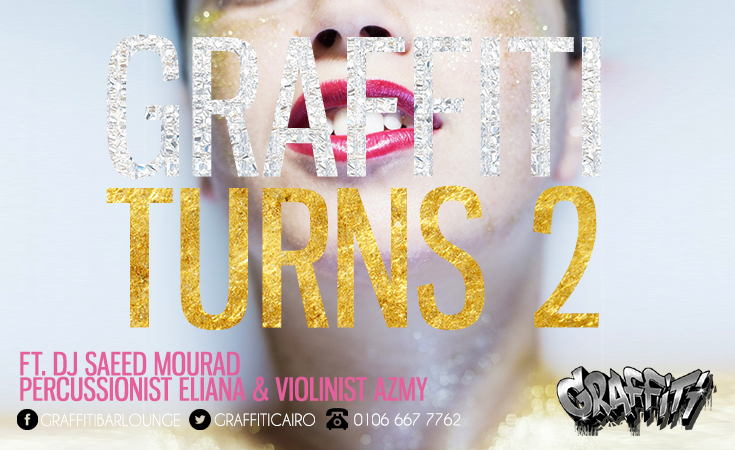 Ah, they grow up so fast, don't they? It seems like just yesterday our beloved Graffiti opened its doors to a slew of wild nights of dancing and unrivalled entertainment and its seemed like just minutes ago it turned one. Well, now the best is yet to come! Get yourselves ready to go out out this Thursday April 23rd as Graffiti invites us to celebrate its second birthday in style!

From funky swing nights with DJ Roro at the decks blasting his beats to Elvis-inspired evenings getting us shaking our blue suede shoes to the timeless tunes by the King of Rock, Graffiti has never let us down with their array of internationally acclaimed acts and on April 23rd the swankiest club in town is setting the bar even higher.

Who doesn't love birthdays? An excuse to drink and dance your heart out (not to mention some celebratory shots and the potential of birthday cake) Graffiti's second anniversary is set to be the best celebration yet thanks to the beats of DJ Saeed Mourad, accompanied by percussionist Eliana (who knows she may even jump out of a cake) and our favourite violinist, Azmy.

Set to be a night to remember and have you fist-pumping until the early hours of the morning, get booking now before its too late. Remember to take lots of photos because, well - when was the last time you woke up remembering what exactly happened at last night's birthday party? Remember how amazing last year's anniversary was? Exactly.

Find out more about Graffiti's second anniversary and how to reserve click here.