Inspired by a movie starring Egyptian actress Faten Hamama, a couple decided to think outside of the box and start Box of Roses. 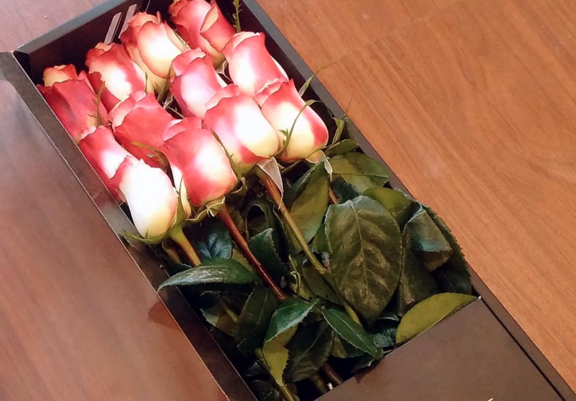 We're clearly not the only ones who spend countless hours watching old sappy romantic movies and reminiscing about the golden age of cinema. That's basically all we do really - reminisce a little and eat way too much ice cream. But we digress. Mariam Omar and her fiancé, Mohamed Hashem, actually made use of their black-and-white-movie-bingeing habit and decided to make some money out of it. How? Well, if you've ever seen Faten Hamama's Nahr El 7ob then you'll immediately catch this reference. Omar and Hashem thought outside the box and recently opened their Box of Roses store in Heliopolis, selling just that - boxes full of roses.

Nahr El 7ob involved using plastic boxes filled with roses as gifts. Pretty simple, right? It's also pretty sweet. When we spoke to Omar, she said, "The fact that someone can just fill a box with just flowers is nice, who doesn’t like that?” When getting a bouquet of flowers we notice that it’s usually filled with greenery and just a few flowers, and it’s quite hard to carry around if you have to. Now with a box of roses the same gesture is just as sweet but without the hassle - much more personal and elegant. Box of Roses offers a box filled with your choice of roses - they have red roses and white roses and pink roses, of course, but they also have glow-in-the-dark roses and even chocolate-drizzled roses (hold your horses, they’re inedible). The box can come in three sizes - it depends on your budget or how badly you messed up. Their boxes come in small, which can hold three to six roses; medium, which can hold up to 16 roses; and large, which can hold up to 30 roses. It also comes in different colours and shapes, and is customisable by adding your own message. Omar says that “The messages I get asked to write range from a simple good morning message to an 'I’m really sorry' message.”

This is a very stylish way to apologise or just make someone’s day a whole lot better. Trust us, even if she says “mesh lazem,” deep down she’ll want you to get her a rose, at least just once. Come on, Box of Roses even makes going the extra mile that much easier. Even girls can get their significant others roses, and Box of Roses didn’t forget that. They've added a wide range of roses that will appeal to guys, like their blue roses.

They’re planning on opening their online store by January, but for now you can find them in Heliopolis, as well as on their Facebook page and their Instagram page @boxofrosesegypt.