Cairo's premier Asian restaurant, the ridiculously chic and taste 8 at Four Seasons at Nile Plaza, will be celebrating Chinese New Year with a festival of food and fabulous entertainment. 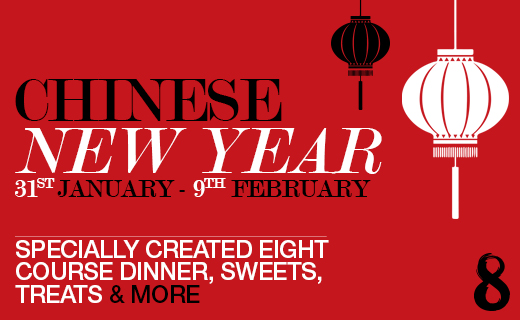 Egypt doesn’t really have New Year’s Eve traditions; we basically take a leaf from the West and use it as an excuse to get thoroughly inebriated. The problem is, however, unlike the West, the parties and events don’t quite match up to our TV-fuelled expectations, so it ends up being pretty abysmal. So that’s why, after another tragic beginning to a year, we’ve decided to give ourselves a second chance to start over and join the Chinese for their New Year, starting 31st of January, and 8 restaurant in the Four Seasons at Nile Plaza will be the perfect place to do it.

This year will be the Year of the Horse and for anyone who isn’t familiar with the Chinese zodiac, the horse symbolises strength, vitality, an ability to see far into the future, eat enormous amounts of hay and gallop at frightening speeds. Okay we made that last part up, but it’s probably true. One thing for sure is 8's Chinese New Year celebrations are certainly making us as hungry as a horse! Their terracotta army of gourmet chefs will be cooking up a special eigh-course set menu dinner for 688LE ++ and will include gifts to take away; think Chinese lanterns, traditional treats, moon cakes and more.

On the 31st at exactly 8PM, there'll be a marvelous spectacle, as the hotel rents out a special felucca, which they'll use to release traditional Chinese lanterns over the Nile, before a authentic Dragon Dance takes place.

The festivities will go on till the 9th February and will include traditional Bai-Sun ceremony at noon followed by a delicious Dim-Sum buffet, and at night you’ll be serenaded by a Chinese Bamboo flute player who guess won’t be taking requests. They’ll also be a calligrapher to write each guest’s name in Mandarin which, if you really want to, you can get tattooed on your arm later on in life thinking it’s cool only to find out that it actually says ‘Dim Sum’.

Finally no, Chinese related event will be complete without the custom fortune cookies but if you’re already attending the Chinese New Year at 8, we can’t imagine your future could look any brighter.