A Sensational Sunset Party is Set to Sweep Gouna this Eid

Ocean Beats Sailors Edition is set to shake up Gouna again this year! The Popeye inside us is positively giddy. 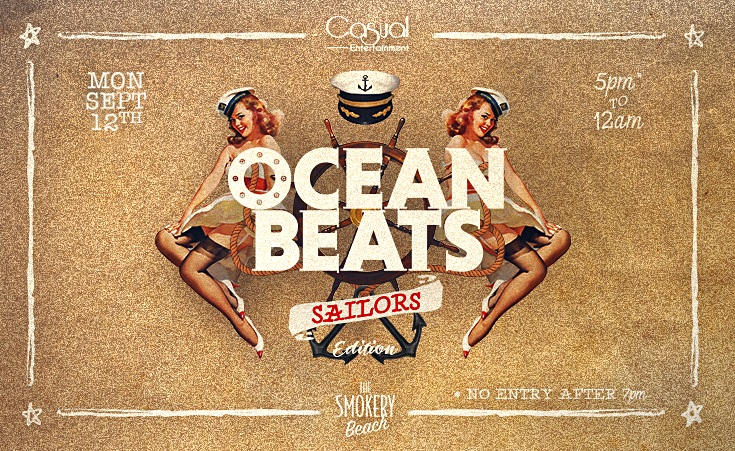 The only time we've gotten to use the phrase 'aye aye captain' is when we're mockingly responding to our horrible daemon-goat boss about a task they've requested - which they don't seem to find too amusing. Or when we're reenacting Pirates of the Caribbean obviously. But we digress. This Eid's Ocean Beats Sailors Edition will be our real chance to bust out that phrase as often as humanly possible. We've been waiting for this moment our whole lives.

One of this year's biggest beachside blowouts, Ocean Beats, which is brought to you by Casual Entertainment, will be hitting The Smokery Beach in El Gouna on the 12th of September, bringing with it some of the city's slickest spinners including Misty, Hafez, Omar El Sabh, and Abou Samra, as well as a healthy helping of antics. And just like last year, we expect all of the country's movers and shakers will descend upon this sunset shebang and party on until the wee hours of the morning. We spoke to some of the dazzling decknicians that are set to light the spot on fire with their beats, and word on the DJ street is the tunes will be light, fresh, funky - like nothing else that'll be playing around town. It will be all fluffy, happy vibes - no dark raves here. Imagine unicorns drinking mimosas.

Now, we don't think there will be any actual sailors present, but that's something we can live with. We do assume however, you're expected to drink like a sailor and that is something we've been training for for many, many years now. Now we all know that sailor-esque drinking awakens the inner Kraken of hunger within us; The Smokery Beach will be whipping up all sorts of epic snack all day.

The event will kick off right before sunset and carry on well past midnight at The Smokery's sleek seaside spot. Sailor caps optional.

Find out more information about booking, times, and everything else at Casual Entertainment's page or follow them on Instagram @casualentertainment, and don't forget your hashtags #OceanBEATS #SAILORSEDITION  #CASUAL #KeepitCASUAL.