Is anyone surprised that Egypt has, once again, received the prestigious honour of having really shitty Internet? Winning! Except not quite in the right area. 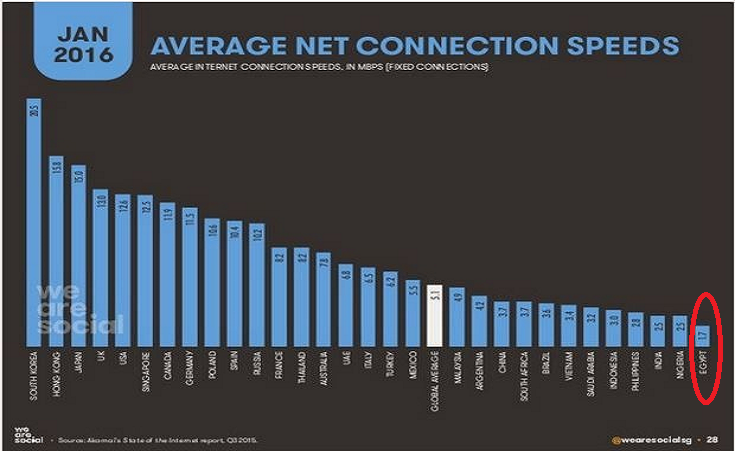 Oh, hello there. We realise you’ve been waiting a while for this page to load, which is why it comes as no surprise that the latest report released by We Are Social’ suggests that Egypt has one of the slowest Internet connection speeds in the world.

On Monday, We Are Social released their report, entitled Digital in 2016, which compiled global digital, social, and mobile statistics from almost 232 countries. With an enormous amount of collected data, We Are Social decided to compile an overview report, selecting 31 countries to reflect the international digital trend. Finding itself in last place on the overview is our very own 2om El Donya.

With a total population of 92.45 million, Egypt registers a 52 per cent penetration with just over 48 million active Internet users, and just over half the population using 3G connections. Even more interesting is that there are more mobile connections than there are people in Egypt, as they register 94 million mobile connections, with 23 million being active mobile social users, and another 28 million active non-mobile social media users. The average Internet speed for fixed connections in Egypt is about 1.7 MBPS, placing the country in last place on the overview list, just behind Nigeria who had an average speed of 2.5 MBPS. Sitting atop the leader board is none other than South Korea, which registers an average speed of 20.5 MBPS. Egypt’s low ranking is based on the four criteria examined by the report: use of Internet, social media, mobile connections, and mobile social.

This report will not come as a shocker to Egyptians as, in recent years, many have taken to virtual protest, complaining of high prices for ludicrously slow Internet. This report is just the latest, and will likely pour more fuel on this fiery debate.