Egypt’s Blue Bra Graffiti to be Exhibited in Montreal

The legendary blue bra stencil that was ubiquitous on Cairo's walls after the revolution, is now going to be displayed as a silkscreen print in a Canadian art gallery. 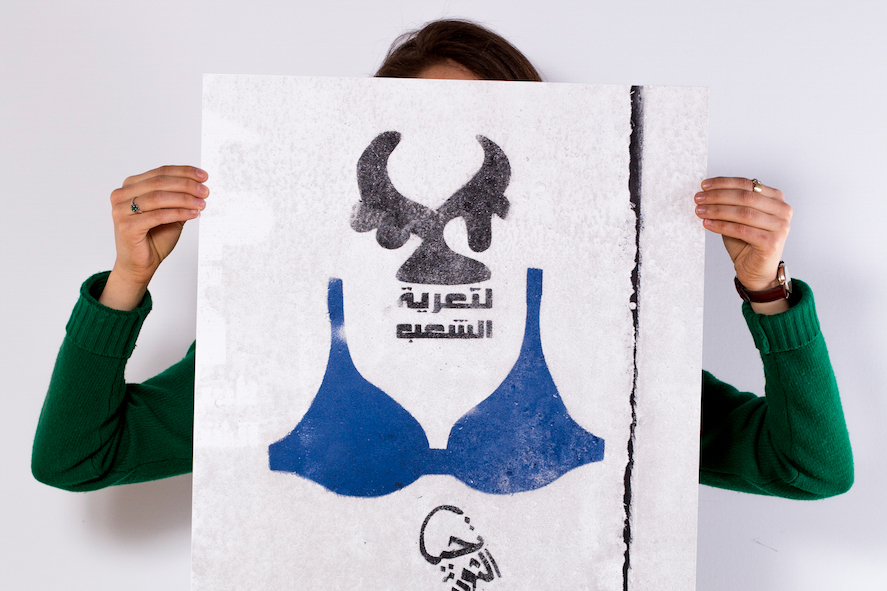 The legendary blue bra stencil that was once omnipresent in the streets of Cairo will now be exhibited as a silkscreen print at Montreal’s Station 16 gallery. The artwork, created by Bahia Shehab as part of her series A Thousands Times No: The Visual History of Lam-Alif, was created in the aftermath of the brutal stripping and beating of a woman by the Egyptian military in December 2010, which revealed her blue bra. It was an incident that remained engraved in history as a symbol of military abuse.

An icon of Egypt’s revolutionary graffiti, the stencil piece, titled No to Stripping the People was selected by the Canadian art gallery among 15 other pieces from street artists across the world who will be part of the A Global Street Art Story exhibit. The project, launched in December 2013, aims to create 16 silkscreen prints with 16 artists from around the world to promote the street art culture worldwide and facilitate exchanges among Montreal’s local street artists with their counterparts worldwide.

Shehab's stencils, sprayed on a bridge in Cairo.

“We love street art for many reasons: the main one is because it strongly promotes the democratisation of art, by virtue of being displayed in public spaces on an unfiltered manner and at little to no cost,” says Station 16 in their manifesto. Shehab’s multiple Lam-Alifs, originally part of an installation and a book published in 2010, became a prominent symbol during the 2011 uprising.

Available today at the gallery, the screensilk print is the first limited edition for Bahia Shehab. Reflecting her urban stencil, the print represents the revolutionary streets of Egypt. Above the imagery of the blue bra is the title No to Stripping the People, written in Arabic, as well as the phrase “Long live the revolution,” written in the outline of a footprint.