On the eve of his Merlin Award presentation - one of the highest accolades given to magicians worldwide - we speak to Moustapha Berjaoui about his fantastical career so far and get him to show us a few mind-blowing tricks... 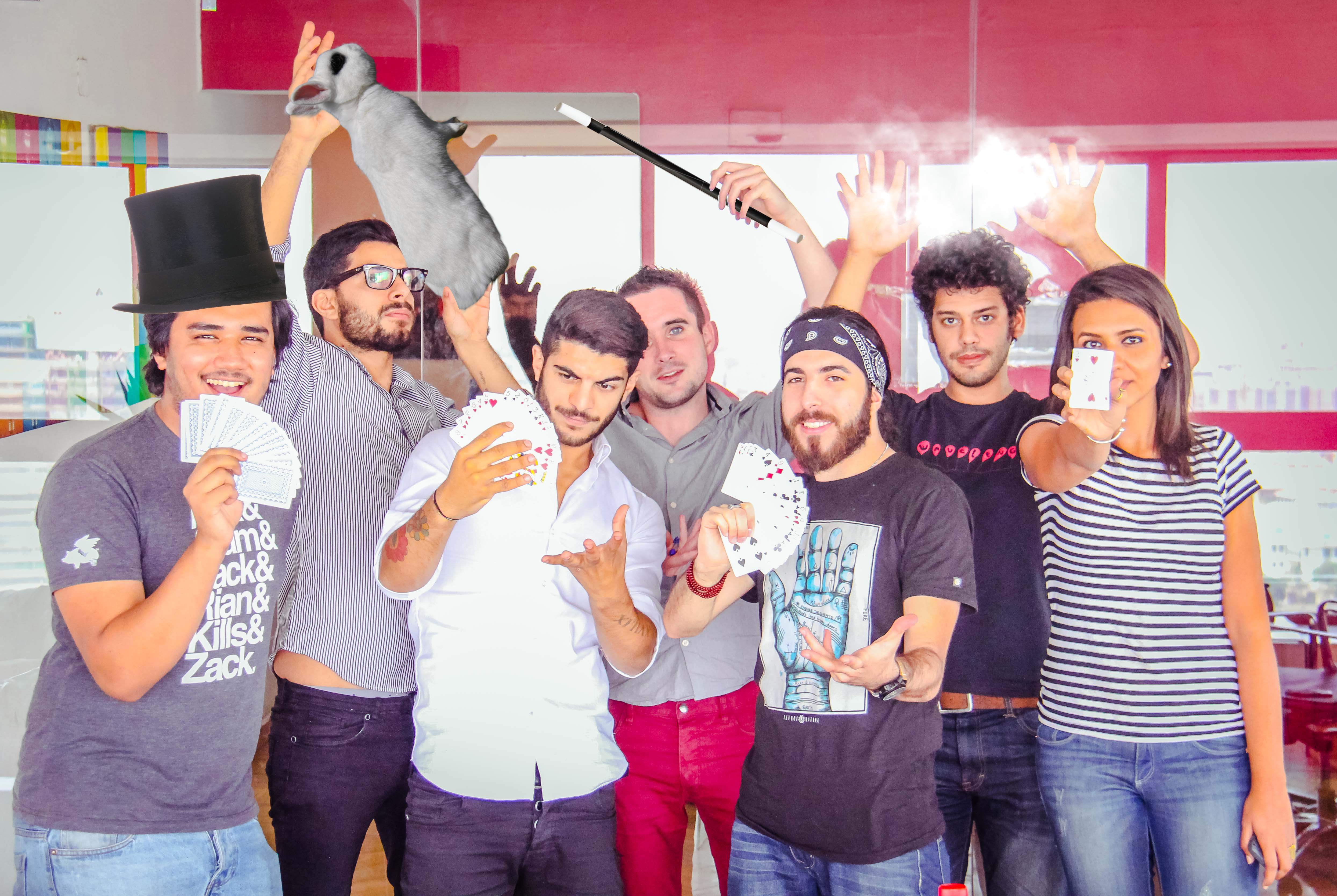 Magic and illusion seems to live in between these two solipsistic worlds, it’s the cup half full/empty analogy. It must be a tough task to make an office of sardonic cynics believe the glass is half full, but five minutes into his arrival at the MO4 office, Moustapha Berjaoui turned everyone into believers, making the glass float.

Berjaoui is Egypt’s leading mind illusionist, self-taught and taking a cue from the likes of infamous street magicians like David Blaine and Dynamo, he’s traveled the world leaving a trail of gasps and awe-struck looks in his wake. He’s also part of the International Magicians Society; apparently the world’s largest magic society which was surprising as we thought it was Hogwarts.

On the eve of Berjaoui being presented The Merlin Award (basically an Oscar for magic) by the chairman of IMS, an award that has previously been received by the likes of David Copperfield and Criss Angel, we sat down with the magic man to talk disappearing pyramids, appearing Happy Meals, and have our minds blown after he shows us a few tricks…

Do you know what you're doing is haram?
Nah! What I'm doing is all slight of hand, mind magic, psychology, misdirection by language, hypnotising...

Magic is haram, no?

Well if you translate magic in Arabic it's sehr, which people say is involved with jin.

So you're willing to go on record that you're not using jin?

No, I'm not using jin. Maybe I have one or two in the house though! If I was using jin I wouldn't be living here, I'd probably be in Vegas! People in Egypt think people like Criss Angel have supernatural powers or use jin, but I don't believe anyone has supernatural powers and just that if you do believe in something, it will happen.

So what do you do if not use supernatural powers?

Like I said, it's all trickery. For example, let's say I'm doing mind reading, it's all triggered, there's a secret way behind it.

Magicians often like to use really sexy assistants for misdirection, that wouldn't really work here in Egypt...

Me! I'm a sexy magician! No, I'm not really into having an assistant because I do more mind magic that requires me only.

What's the difference between a magician and an illusionist?

They're all the same but for me I'd like to be called more of an illusionist than a magician. But there's two types of illusionists, what I do, or grand illusionists who only do stage magic, like cutting people in half. I like to watch that stuff but I don't like to do it.

So you're not at the level where you could make the Nile disappear for us today?

Maybe, if you want, man. Maybe the Cairo tower.

In a trick way, yes.

You're not supposed to tell us it's a trick, we believe in this wondrous world of magic, you're ruining it for us!

Haha, I do believe in it I just don't claim to have 'real' magic or superpowers. I can bend steel in a trick way, not for real.

How did you get into magic in the first place?

I saw a magician when I was four-years old on my birthday. He was really old, and kept producing coins from my ears, from my arms, from my ass, everywhere and I thought it was awesome! I wanted to know what it was all about. My grandmother told me it was magic and later on she went to Vegas and bought me my first magic set. I owe it all to her. I kept learning with it and of course all the family kept encouraging me even though I was doing lame shit.

What kind of mentality do you need to have to become a mind illusionist?

Be smart. And practice a lot. Usually mentalists use basic tricks, they don't need slight of hand and fancy stuff. The way it's performed and presented makes it more impressive. You can do the same trick in a comedic way or in a mental way.

When you were in school did people think it was cool you were doing magic?

I didn't tell anyone in school! I started showing people in grade 10 and people were like "Woah!"

When did things start getting serious?

When I was 13, I saw David Blain and it was my first introduction to street magic. I thought it was awesome and I have to start doing things like that. When I was 16 I started becoming more professional and visited China, Dubai, Hong Kong, Lebanon and the UK to learn and perform.

Is this how you make your money or do you have another job?

Yes it is. I do photography and cinematography for fun as well but mostly magic is what I do.

How much does magic pay?

Well, being a member of the IMS, you get paid a lot.

How did you get into IMS?

Is there an initiation to get in?

Yes, they have certain requirements to see how good you are. You have to have to also take an oath to obide by the magician's code.

So you're not allowed to tell anyone how you do your tricks?

Sometimes when people think I'm doing black magic here, I tell them it's just a trick and show them and I'm being honest. But subconsciously they think the other way... I'm not sure what it's called...

Wizardry? Are you a wizard, Harry?

Haha no. Subconsciously, people just aren't convinced it's a trick.

Do you use your magic on a day to day basis to manipulate people?

Yes, but I do it for good! Like sometimes if a delivery comes to the door and I ask how much, let's say he sayd 100 LE. I'll tell him I only have 1 LE and then I'll do a trick and change the coin into a 100 LE note and freak him out.

Do you give him a tip as well or is the magic enough?

Have you ever paid for something in magic?

Yeah, I did that in McDonalds once. I asked the guy if there was a straw in the bag, then I looked inside as if I don't know and produced a 30 foot pole of straws from it. He gave me a free happy meal!

What is the magic scene like in Egypt, are there a lot of magicians?

Birthday magicians yes. Circus stuff. They're really lame and mainly copying each other. They don't do anything crazy. A few people are really good at kids' magic but other than that there's not much competition. Some people hate me, they're kind of jealous.

Who is your biggest idol?

I don't really have an idol, I think just anyone who respects magic and keeps it alive is inspiration for me.

Where do you want to take your act in the future?

I'd love to perform in Las Vegas and meet other big magicians.

A lot of these magicians make a name for themselves with one big stunt. What would yours be in Egypt?

Make the pyramids vanish, if it's an illusion. For a stunt, maybe make my heart stop, maybe freeze myself. I have a video of mine from when I was 16. I took a needle from a girl who had a thread, I swallowed the needle and produced it from my stomach. It took me like two months to get healed. It really hurt.