Dubbed 'Phiomicetus anubis' after Anubis, the Ancient Egyptian god of death, the new 43 million-year-old species was discovered in the Fayum Depression by a team of Arab-Egyptian paleontologists. 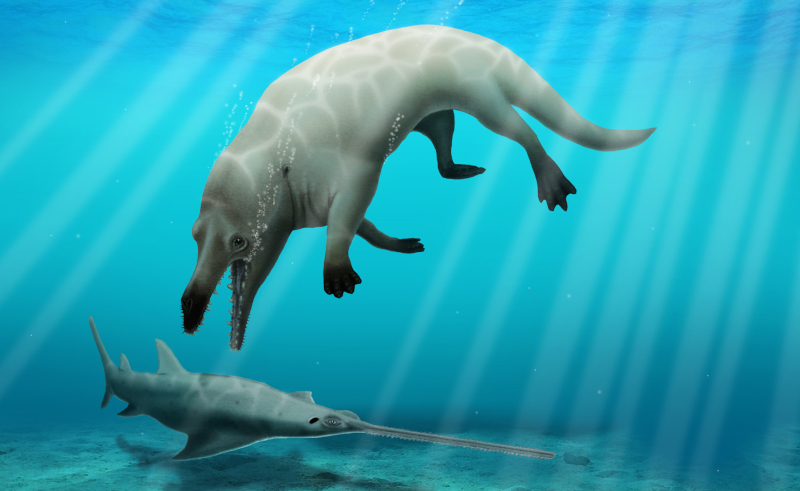 An Arab-Egyptian team of paleontologists have discovered a new semiaquatic whale species in the Fayum Depression in Egypt's Western Desert. The newly unearthed fossils were analysed in the lab of Hesham Sallam, the founder of the Mansoura University Vertebrate Paleontology Center. Dubbed 'Phiomicetus anubis' after Anubis, the Ancient Egyptian god of death, the new species was 3 metres long and lived more than 43 million years ago. It had hind legs that may have allowed it to walk on land, and powerful jaws that marked it as a potential apex predator.

The fossilised remains of the 'P. anubis' provides significant insight into the evolution of whales, such as the long third incisors nearits canines that would have allowed it to hunt elusive prey, rather than the cheek teeth that modern whales have.

The 'P. anubis' was found in the same area as other paleontological finds, such as the 'Rayanistes afer', an aquatic whale that may have been hunted down by 'P. anubis'. While the aptly-named 'God of Death' was likely quite high on the food chain, it's not clear if it was on the top - small bite marks on the ribs show that it was bitten severely by sharks. Was it enough to kill this particular whale? Or was it a challenge that the 'God of Death' swiftly punished?

The study, which was written by lead author Abdullah Gohar from Mansoura University, was published earlier today in the British scientific journal, 'Proceedings of the Royal Society B: Biological Sciences'.