Fashion One TV Is Coming To Riverside

The global lifestyle TV channel will be taking over Riverside for two incredible nights of partying. 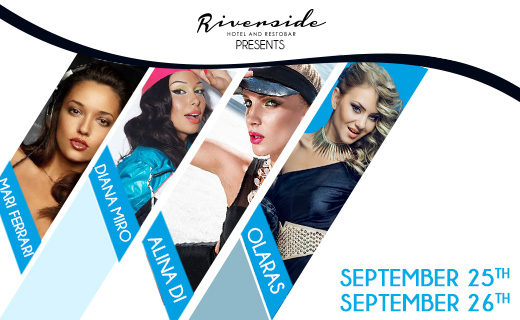 We’re officially putting Cairo’s cosmopolitan bunch on notice; Riverside, in association with global lifestyle and entertainment TV network Fashion One TV, will be bringing you two of the biggest, best nights in Cairo’s nightlife scene. On both nights, the international club songstress Diana Miro and sexy saxophonist Ola Ras will be on the scene keeping the good times rolling.

On September 25, the superstar DJ Mari Ferrari will be on the 1s and 2s, smashing out some incredible House bangers, and on September 26, multi-talented DJ/model Alina Di will take her turn on the decks, playing tune after tune guaranteed to keep you dancing.

If all that wasn’t enough, TV juggernauts Fashion One TV will be on the scene, filming both nights to create a television segment extolling the virtues of Cairo’s white-hot nightlife scene, so dress to impress!  VIP packages are available, so call 0121280 1290now for reservations!