Get funked up by the beach courtesy of Cairo's coolest party pros as six local DJs each takes their turn at their at the decks at Ciel. 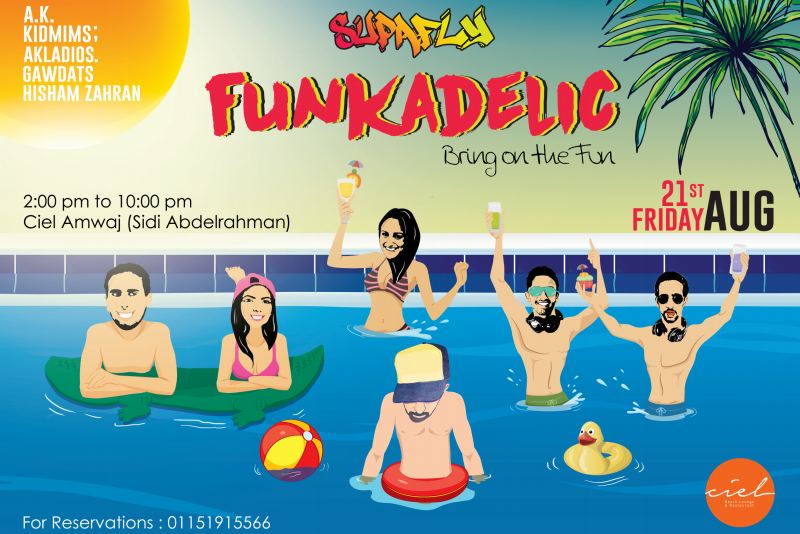 Pool parties have long epitomised the very essence of summer; very few things on this earth could trump a sun-soaked day by a turquoise body of water where the booze is flowing and the music is pumping. All the aforementioned elements, aka the best things in life, are colliding this summer on Friday the 21st of August, for one sizzling seaside shebang – and if things get too heated you can always jump in the pool.

Funkadelic is brought to you by party fiends Supafly, aka the guys who consistently pull together insane Hip Hop bashes that draw out the entire city and have Cairenes across the board channelling their inner gangster on the dance floor. They’re also the same crew behind bringing over the paradisiacal gangster that is Coolio to Cairo. This time around, the party purveyors have teamed up with Sahel’s Ciel to bring you some good old fashioned daytime shenanigans by the shore! “It’s a morning party because that’s really what summer is all about. It’s all happy, light, fluffy vibes by the pool,” Alia Abdelrahman, one of the organisers, tells us of what to expect of the event.

The crew have tapped six local spinners to take charge of the decks – forever immortalised in cartoon versions on the flyer. They’ve got cap-wearing cutie Kidmims, the dynamic duo that are Gawdat, iconic House hero Hisham Zahran, femme fatale Akladios, and beatmaster A.K. lined up to leverage their musical prowess on the turntables and ensure that the Sahel air sees some sick beats being spun out into it. Between them, we can safely say that their collective musical repertoire will keep the party vibes upbeat and amped up.

While Supafly usually goes the whole swagger, R&B, Hip-Hop route, which has become their signature, this time around they decided to switch things up, proving their malleability on the party scene. You’ve got some House, Deep House, chill out tunes, some of their signature Hip-Hop and of course, a dash of funk! “We wanted to do something different this summer; we know people love this kind of music and it’s also important to us to promote local talent,” Abdelrahman explains, “So we chose some high profile local acts to take charge of the music.”

We suggest you get reserving because the list is already filling up fast. Also, unlike certain parties and spots across Sahel which shall remain nameless, Ciel and Supafly will not be charging you an extortionate amount of money just for the pleasure of placing your feet on their holy floors. Entrance is 250 LE, you can pay at the door, and – wait for it – FREE BOUCHON! That’s all folks.