Previous Post
FIFA: Qatar 'Will Not Host 2022 World Cup'
Next Post
12 Things That Cost as Much as an iPhone 6

One of Israeli's best-known gay club night organisers has received a flurry of criticism after they used ISIS-inspired imagery to promote their latest party. 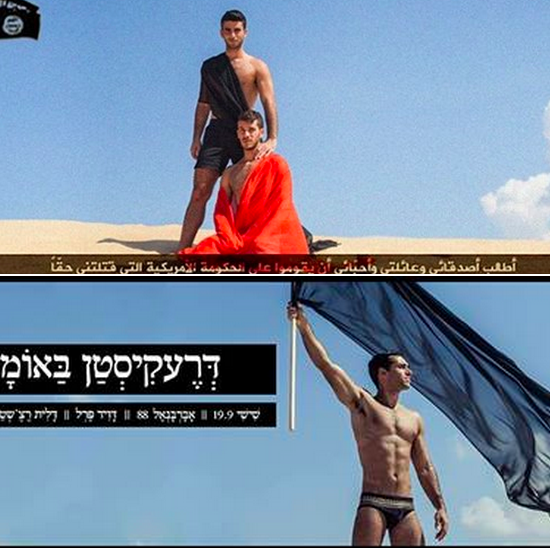 Israeli nightclub promoters sparked outrage by using imagery mocking the group's brutal beheadings to promote a party night. The twisted campaign by one of Tel Aviv's most popular gay club party organisers has inspired a flood of criticism and anger online after using imagery inspired by the Islamic State's executions on a number of posters.

Club posters feature men in orange jumpsuits and topless men waving ISIS-style flags. Many claim that the images are designed to mirror the brutal execution of three Westerners carried out in recent times.

The adverts were designed to promote a party dubbed 'Drekistan at the Haoman' which took place last Friday at Tel Aviv's Haoman 17 Club.

One outraged social media user said:"Disgusting! Getting a laugh off of the murder of innocent victims." Meanwhile, another wrote "very baaaaaaaaaaad."
A post on the club's Facebook page, wrote "As the new Islamic State gains traction in the Middle East, we at Drek have decided to give in to Sharia law and cheer the stubborn Daesh."

Amiri Kalman, one of the Drek's founders, said in response: "We are trying to react to current events. We have been doing it for a number of years. But we reject violence in any form and that includes the (execution) videos intended to scare the world. Therefore we also refuse to participate with this fear and refuse to become hysterical. This is satire, and our way of showing our contempt of them and their videos."

He further noted that the party itself did not include any Islamic State-inspired imagery or props.