Game of Thrones Stars Visit Greece’s Refugee Camps: "They Are Just Like You and Me"

After a thrilling season finale, Game of Thrones stars Lena Headey Maisie Williams, and Liam Cunningham visited the Syrian camp in Lesbos and urged European leaders to "do more". 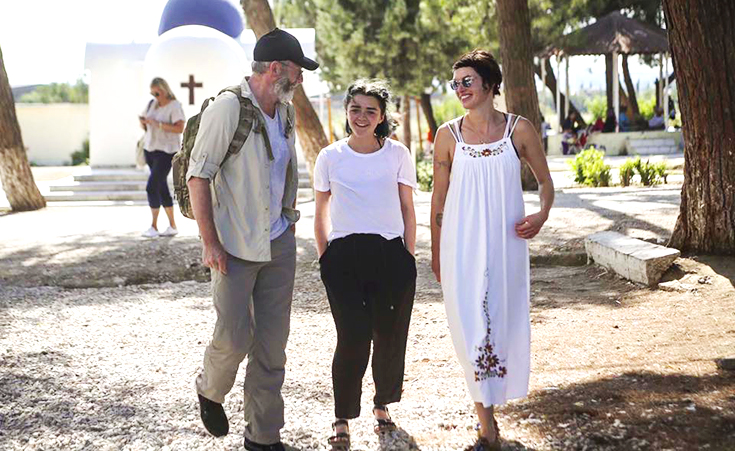 The Game of Thrones Finale was incredible, and although we though we wouldn't hear about them for awhile comes news that GOT stars Lena Headey (Cersei Lannister), Maisie Williams (Arya Stark), and Liam Cunningham (Davos Seaworth) decided to take the time to visit a Syrian refugee camp in Greece this week and urged European Union leaders to do more to assist them.

The cast members joined the International Rescue Committee (IRC), as they announced on a video posted through the HBO series’ Facebook page. “This is not an earthquake, this is not a tidal wave. This is a man-made crisis. 57,000 stranded in Greece. Refugee camps in Europe? Is this truly the standard EU leaders want to set as the way to respond to the global refugee crisis?,” Cunningham said.

The three actors met with refugees who have been impacted by the EU-Turkey deal implemented in March on the island of Lesbos, and at two other sites in the north where the IRC runs programs in protection and environmental health. The agreement allowed Greece (which is an EU member) to send Syrian asylum seekers to Turkey in an attempt to stem illegal immigration into Europe. But, human rights organisations such has Amnesty International have alerted on the inhumane consequences of the agreement.

“They are just people, like you and me,” said Williams. “I met this 21-year-old girl who was headed for university to do amazing things in biology and now she’s had all that taken away from her; and you are worried she wants to come and take from your country. She is just a girl,” she says in a video published by AJ+.

The stars from the hit series also joined efforts with the humanitarian organization to raise funds for refugees in an effort dubbed #RealmtotheRescue.

The visit replicates the efforts of celebrities and media personalities to shed the spotlight on the unparalleled humanitarian crisis and urge the international community to take action.  Earlier in march, George and Amal Clooney joined the same organization to meet Syrian families in Berlin, along with the IRC’s President and CEO.