Global Shapers: A Piece of the World Economic Forum in Egypt

Around the world, a community of young leaders is gathering to shake up and shape a better future. Valentina Primo meets two Egyptian members to unveil what the global network entails. 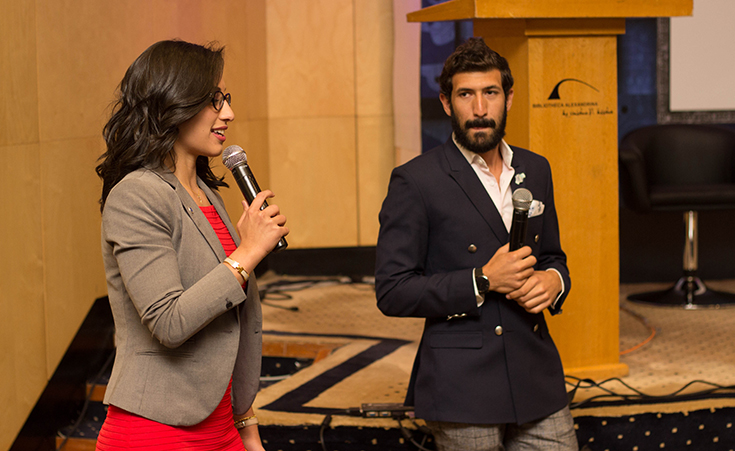 Sitting at the Techne Summit in Alexandria, moderating a panel on Neuro-Linguistic Programming, Mohamed El-Dib's bold statements stand out. “Well, I actually don’t agree with people’s idea of success. Success to me is a failed attempt of failure,” he says. On the other side of the room, Reem Jabak, board member of this entrepreneurial summit that has gathered 100 startups and 80 international mentors, nods. The event has brought them together to meet in person for the first time, even though they have been working together for three years through a global network: The Global Shapers.

Created by the World Economic Forum, this international community aims to support and nurture youth across the world, with a focus on dynamic, entrepreneurial, and socially-engaged young leaders between 20 and 30 years old. “In Egypt, we’ve been around for three years, and we have five hubs: Cairo, Giza, Alexandria, Assiut, and Tanta,” says Jabak as she takes a break from her restless position as a team member of this massive event.

Being a global shaper is neither a club nor a job; there is no salary involved, there is no schedule attached, and no obligations to perform. Its sole purpose is to foster communities of young changemakers who support each other in their attempt to change the world. “I got involved two years ago, when I met a partner at a conference who nominated me to be a part of them,” says Jabak. “The initiative was created by the World Economic forum, which looks at every city and tries to help out with the issues they are facing, but not from the charity perspective,” she explains. “It all started because they realised that more than 50 per cent of the world’s population is under the age of 27; so they thought: ‘if we want to make a change, it has to be them'.” Reem Jabak, team member of the Techne Summit, as she takes a break between the conference's panels.

Born to Lebanese-Egyptian parents, the 27-year-old entrepreneur spent part of her childhood in Saudi Arabia and returned to Egypt to begin an academic career where she eventually felt she was not fulfilling her passion. “That’s when I realized I wanted to study marketing. I began working at three jobs at the same time just to get experience,” she narrates. As part of her involvement with the Global Shapers community, Jabak co-organised the Techne Summit together with other colleagues in 2015, aiming to support entrepreneurial youth across the country.

“The name Global Shapers says it all,” says Mohamed El-Dib, who is acting as MC in some the panels. “Since I was young, I’ve always wanted to change the world in so many ways. We are all shapers, with no hierarchy, with different colours, each one in a different way. We all speak equally and basically just help each other. Wherever we are, when we meet a person from Lebanon, Switzerland, or wherever who is a shaper, we resonate with each other,” he says.

The offspring of a family of Turkish, Lebanese, and Egyptian origins, England-born El-Dib feels he has been an entrepreneur since he was a child. “I’m an explorer, a storyteller. I am always creating stories and started many initiatives. I sold several businesses; I failed many times, and had several people steal money from me several times, but I’ve built again,” he says. As one of his latest ventures, the 26-year-old entrepreneur has recently launched a creative agency called Monkeys in Tuxedos, which stood out earlier in December at the RiseUp Sumimt, as founders showed up in inventive costumes. “We think there is a creative gap for monkeys in tuxedos. Let me tell you what I mean: most ideas are either the monkey (the very cool, creative part) and the tuxedo is the strategic, objective-based part,” says this restless shaker. “I’m self-made, I’m always out and about exploring places and have always wanted to change the world; that’s why I joined Global Shapers,” he says. Mohamed El Dib, founder of Monkeys In Tuxedos, moderating a panel at the Techne Summit 2016.

With 5,972 members worldwide, the community is grouped in 453 hubs across all continents, with Alexandria being an unwaveringly active one. Last April, they organised an event titled Reach, where they collaborated with UNHCR and scout team GWEN to help Syrian Refugees. In November 2015, they organised a networking entrepreneurial event at the Global Entrepreneurship Week.

“Someone has to take the initiative for opening a hub,” says El-Dib. But the community, they explain, is not there to evaluate or judge each other’s activities. “It’s more of a support network. It’s open and we are not competing. We replicate projects a lot. We are all working together harmonically,” he says. “The thing about Egypt is that it falls under two regions: Middle East and Africa, which it makes it even cooler, because we have to communicate both with the MENA region and the Africa region, and we reach out to both,” adds Jabak. "A lot of African startups were actually interested to be at the Tecne Summit.”

Every year, all hub curators gather at an annual meeting held in Geneva, where the organisation headquarter sits. Within each hub, youngsters across the board hold meetings to decide the themes that will function as an umbrella for the year’s activities. “This year we chose youth empowerment, so we sat with students and noticed that they kept commenting that they don’t know what to do with their careers,” says Jabak. “You know how in Egypt everyone tells you that you have to be an engineer or a doctor; so we decided to mentor students and have high school sessions where we asked: how about you lead your career,” she explains.

The event had such resonance that they had to repeat it, following parental request. “It was very interesting because it kind of shed the light on the fact that people don’t know the opportunities they have,” Jabak concludes.