It's been a whole year since Graffiti - the Four Seasons Nile Plaza's exclusive Nile-side hot spot - flung open its doors, so this Friday they're celebrating with style... 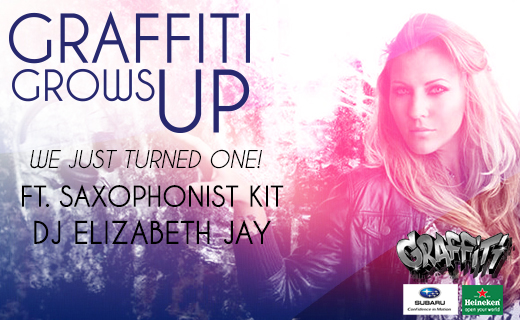 It seems like just yesterday Graffiti opened its doors and everyone in the city was buzzing about the new exclusive club at the Four Seasons Nile Plaza. With everything from live bands and Rock 'n' Roll brunches to wild nights of dancing to the pulsating beats of DJ Roro and the slew of international acts flown in for special occasions, the club has seen it all and more, in the short span on one year. And now, their anniversary is fast approaching and we all know what birthdays mean. Candles, cake, dancing, lots and lots of booze, and more importantly, celebratory shots. We love birthdays; they're an excuse to get drunk and later say, "Well, it was my birthday…" And seeing as it's Graffiti's day of birth, and they are a club, it is practically obligatory that everyone in the club does some drinking worthy of its purpose.

And Graffiti are going all out. They’ve got DJ Elizabeth Jay flying in to rock the dance floor with her eclectic mix of beats, and she'll be accompanied by sexy saxophonist Kit, who is clearly cool enough to warrant only one name, like Madonna. We can't tell you how the night will end but we can tell you that A)Both women are pretty hot,  B)There will be dinner, which is always necessary for a night of drinking and, C) After dinner you will likely not be able to leave the dance floor and you'll be partying into the wee hours of the morning to some fist-pumping beats. And finally, it's set to be a neon extravaganza of electric colours, rave-style, complete with glow-in-the-dark paint and glow sticks. Now, if that sounds like something you'd be interested in – and let's face it, who doesn’t love glowsticks? – then you better get booking! The birthday bash will be on the 11th of April and it's for 350 LE, all inclusive, including a delicious dinner!

You can book your spot at Graffiti's anniversary this Friday, 11th April, using Tazkarty.