The feud between Egyptian actors Ahmed Ezz and Zeina continues, as the mother of twins posted a caricature on her Instagram page... 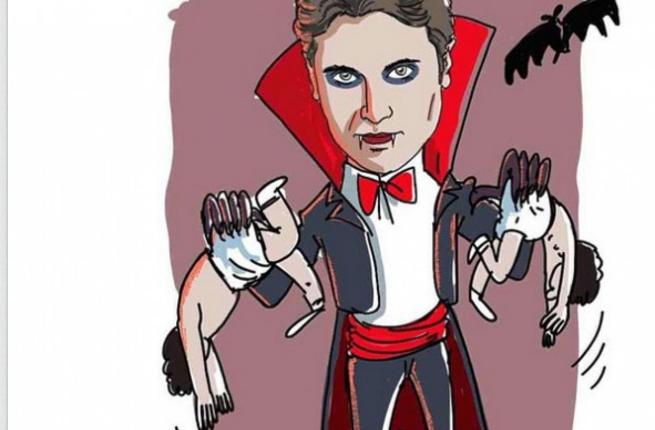 On her Instagram account, Egyptian actress Zeina posted a cartoon made by one of her fans presenting actor Ahmed Ezz as a blood sucking vampire holding her (their) twins accompanied with the caption, "This cartoon was sent to me by a talented artist named Ihab Al Nobi. In my opinion, this photo does not even half represent Ezz's cruelty. We need a law that protects the rights of children. God, may you have revenge on all unjust deniers of their children."

The legal feud continues as actress Zeina claims they secretly wedded in 2012 and she had the twins the following year - a claim Ezz has consistently denied. Zeina is attempting to get Ezz to conduct a DNA test but so far has been unable to do so, explaining that Ezz possesses both copies of their marriage certificates which stops her from presenting them in court.

Talking to private Egyptian channel CBC, Zeina claimed the actor was getting friends to bully her into dropping the lawsuit by threatening her and her twins.