ID Black Onyx REALLY wants you to win big, so they've increased the ways you can get your hands on ID prizes and the coveted trip to Milan with a whole load of fun and games on their Facebook and Twitter pages... 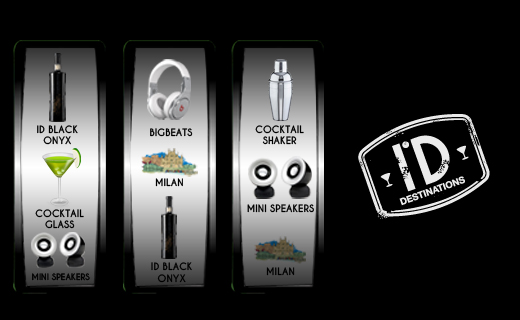 ID Vodka seem to be on a serious roll with their incredible ID Destinations campaign. At the end of June, they'll be heading to Milan for an extravagant event to celebrate their exclusive Black Onyx vodka and they're spinning up a storm through the city with a line-up of events in which they're giving a few lucky lovelies the chance to join them on their Italian adventure.

But if you can't make it to the parties across the city - not to worry, there's plenty of chances to win on both their Facebook and Twitter pages! And you know how much we love a little social media sexiness.

So here's the deal with the countless competitions (they've got so many we've broken it down for you so you don't get lost):

FACEBOOK SLOT MACHINE: Head their Facebook page and click on the 'Win a Trip to Milan' tab. You'll be asked to accept two FB permissions before being directed to a awesome slot machine game. You get five spins and as well as a host of sexy prizes such as martini and cocktail glasses as well as Black Onyx bottles, you can also win a chance to be entered into the final draw for the Milan trip. Better yet, EVERY TWO HOURS, you get five more spins!!! So you have literally hundreds of chances to win!

FACEBOOK ID DESTINATIONS QUIZ: Every Sunday and Tuesday for the next two weeks, the ID team will be posting a pop quiz on their page at exactly 12pm. The first person to answer correctly wins a beautiful bottle of Black Onyx. ONE person will get into the draw to win a trip to MILAN!

ID TWITTER COMPETITION @IDCOCKTAILS: EVERY SINGLE DAY at 12pm on Twitter, they'll be asking an Italy related question. The first person to tweet in the correct answer gets either martini and cocktail glasses, Black Onyx bottles and, as always, one person will be entered into the Milan Trip draw.