Following the July 3rd ouster of Morsi, the nation is in turmoil. We continue with our live updates... 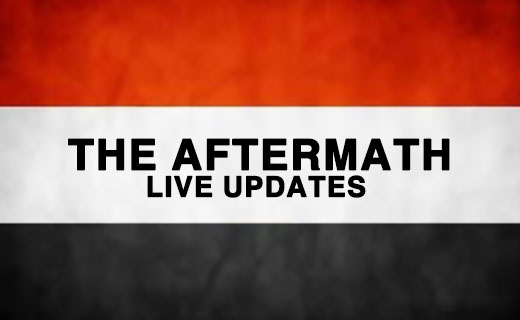 20:55 - A group claiming to be Muslim Brotherhood members announced their separation from the party’s leadership, naming themselves the Free Brotherhood Front. (Via Daily News Egypt)

20:00 - White House Sate Department speaking to Sky News Arabia: "Morsi ruled undemocratically, it is not in our best interest now to cut aid to Egypt".

17:56 - Confirmed by CairoScene's personal sources: over 10 Al Jazeera Mubashir Misr staff have resigned. Here's our exclusive interview with one of them, seasoned journalist Karem Mahmoud.

17:30 - A group of pro-Muslim Brotherhood demonstrators are attempting to return to Cairo University, carrying mock coffins. Photo via @SorayaBahgat:

16:55 - Joint Armed Forces and Ministry of Interior just finished. Below are English summaries of their statements:

We believe in freedom of speech and freedom of press, for all journalists and Egyptian people.

We're here to talk about the events that have transpired recently with all transparency and with full disclosure.

Police forces support the Egyptian people, work to ensure their safety and their belongings' safety and will not intervene in political scene in Egypt.

Police have suffered many false accusations (opening of jails, burning of stations, etc.) yet they have suffered in silence and left it up to history to vindicate them.

Over the past two years, there have been 221 martyrs from the police force and over 9188 injuries.

Police forces have taken to the streets (over 440,000 police officers) since 25th of June to ensure safety of people and public property.

In full co-operation with the armed forces, there have been no robberies or thefts reported since June 30th and we've managed to apprehend 117 firearms, 2 gangs, and 347 escaped convicts.

Since 28th of June, police forces have lost 12 officers and 107 officers have been injured from gunshot wounds, live ammo, explosions and burns.

Post 30/6, there have been riots and orchestrated attacks on the armed forces' troops in Sinai, which resulted in 7 soldiers being injured due to firearm wounds.

Armed forces were deployed to "National Guard Institute" yesterday to secure perimeter and were urged to exercise self-control.

Today, at 4:00 AM, gatherings at the National Guard started initiating violence by throwing stones at the Armed Forces, which then developed into live ammo shots towards army officers and policemen, and which resulted in the deaths of two Army officials: Officer Molazem Mohamed Messeiry and Recruit Galal Gaber, with 42 injuries and 8 critical cases.

It is the armed forces' role to ensure safety of ALL protesters, regardless of political affiliations.

The clashes that occurred earlier today were resultant from a group of riot starters attacking armed forces and public buildings and attempting to prevent the Armed Forces from protecting the public properties.

The armed forces did not initiate the attacks with the protesters.

Armed forces were being attacked by snipers that were situated on the top of buildings.

Armed forces did not use any illegal measures of self-defence.

Pictures of dead children that Religious Parties claim have been murdered in today's clashes are false, and have been used earlier in March as part of the coverage of the massacres that were happening in Syria.

Armed Forces will provide media spokespeople present with CDs that include the footage being aired during the press conference and that they may use however they see fit.

15:30 - Grand Sheikh of Al Azhar: Violence is 'un-Islamic'; calls on all Egyptians to avoid anything that will lead to more bloodshed.

15:27 - Pro-Morsi and Muslim Brotherhood protestors have returned to the Republican Guard. As tensions rise, tear gas has said to have been used by the Army. Photo via @BasilDabh:

15:10 - Grand Sheikh of Al-Azhar is said to be addressing the nation shortly.

14:25 - The Tamarod campaign has claimed, via their official Twitter account, that "MB and Salafy [sic] leadrs pushed Morsi fans to carry guns and shoot the army to free Morsi!" while a video has been released showing Army officials pleading with pro-Morsi protestors to allow an ambulance to pass:

14:10 - Many images showing FJP and Muslim Brotherhood supporters using photos of atrocities in Syria, claiming they were taken this morning at Republican Guard, as well as photos of weapons said to be seized at the site have been posted on this Facebook page.

13:48 - Interim president Adly Mansour warns protestors to stay away from military institutions and has formed a committee to investigate this morning's violence.

13:30 - Muslim Brotherhood spokesperson Ahmed Aref has been arrested on charges of the possession of weapons.

13:17 - Egypt's public prosecution is said to have called for the arrest of preacher Safwat El Hegazi on charges of incitement of violence.

13:16 - Turkey has condemned the violence in front of the Republican Guard this morning calling it a massacre, as deputy Prime Minister Davutoğlu tweeted this morning.

13:00 - The Armed Forces have begun releasing footage of the demonstration at the Republican Guard which turned violent in the early hours of this morning. Full footage is set to be released later today:

12:31 - The State Information Service has announced a press conference which will include a representative of the Ministry of Defence at 2.30PM, local Cairo time.

12:25 - As the FJP call on the international community to intervene to end "the massacres taking place in Egypt," Dr. Mohamed El Baradei reveals his proposal to end the current political crisis:

- granting the new parliament powers of questioning the president, participating along with the judiciary in appointing the public prosecutor and his deputies

- elected governors and the transferral of powers from the Justice Ministry to the Supreme Judicial Council and reassessments of Egypt's security apparatus at central and national level.

- all political groups be treated without discrimination, working on proposals that all groups can agree on without exclusion.

- rooting the rights and basic freedoms for Egyptians, not only in [the] constitution and law, but also in cultural construction, which prevents aspects of sectarian, religious or ethnic discrimination.

12:19 - There are reports that the Egyptian prosecution has ordered the complete shut down of FJP headquarters in Cairo, according to a source in the security forces. He added that Police found “flammable liquid, knives and arms to be used against the June 30 protests.”

12:15 - MENA and Al Jazeera both report the escape of two soldiers who were captured, beaten and forced to say pro-Morsi statements on a loud speaker by supporters of the ousted president.

10:30 - The country is waking up to the news of mass shootings in front of Republican Guard HQ where Morsi is being held. Military accusing the Muslim Brotherhood of attacking first and Muslim Brotherhood claim army opened fire at protesters. Health Ministry reporting 322 injured and 42 dead with two army officers being kidnapped.

21:55 - CNN remove all cameras from Tahrir square amidst fear of violence against them after misreporting. Protests erupt in front of CNN building in New York with chants of "CNN say the truth". (Photo via @ASE)

20:30 - Reports coming through from Tamarod suggesting that Zaid Bahaa El Din (Director of The Egyptian Initiative for the Prevention of Corruption) will be announced as Prime Minister and Mohammed El Baradei as Vice President.

19:50 - NSF's Hamdeen Sabbahi: "We are having a serious and honest discussion with Al Nour party to try to convince them of ElBaradei. ElBaradei is important for our image around the world, he can show the world this is a revolution and not a coup."

19:00 - Washington unlikely to cut financial aid to Egypt say US lawmaker. (Via AhramOnline)

17:35 - Anti-Morsi protesters march from Zamalek to Tahrir. (Photo via @Naglarzk)

17:30 - Anti-Morsi march from Abesseya to Tahrir begins. (Photo via @Aaron_T_Rose)

17:00 - Freedom & Justice Party's main headquarter in Cairo has been shut down by authorities, says @IkhwanWeb.

16:50 - Chairman of the House Foreign Affairs Committee and ranking member Eliot Engel release this statement from Washington in support of the government ousting:

"The decision by the Egyptian military to take state authority out of the hands of the ruling Muslim Brotherhood government marks another sharp turning point in Egypt’s incomplete revolution.  What the Brotherhood neglected to understand is that democracy means more than simply holding elections.  Real democracy requires inclusiveness, compromise, respect for human and minority rights, and a commitment to the rule of law.  Morsi and his inner circle did not embrace any of these principles and instead chose to consolidate power and rule by fiat.  As a result the Egyptian people and their economy suffered greatly.

"It is now up to the Egyptian military to demonstrate that the new transitional government can and will govern in a transparent manner and work to return the country to democratic rule.  We are encouraged that a broad cross-section of Egyptians will gather to rewrite the constitution.  All parties in Egypt must show restraint, prevent violence, and prepare to be productive players in the future democratic Egypt.  We encourage the military to exercise extreme caution moving forward and support sound democratic institutions through which the people and future governments can flourish."

16:40 - Tamarod group announce via Twitter "we will not accept anyone but Mohammed El Baradei as Egypt's Prime Minister."

16:30 - The Arab Network for Human Rights Information (ANHRI) said it has documented the killing of 154 Egyptians during President Mohamed Morsi’s rule, representing a period of one year and three days. (via @EgyIndependent)

16:05 - Pro-Morsi supporters caught with Molotov cocktails on Khalifa El Ma'moun street in front of Triumph hotel, on their way to meet up with other protesters in Rabba' El Adaweya.

16:00 - Mohammed El Baradei speaking to Al Masr Al Youm: "We would have slipped into civil war and a fascist country had Morsi not been ousted". Meanwhile Egyptian Borsa release statement - "We have received no news or commands in regards to freezing MB assets and shares".

15:55 - The Egyptian Satellite Company (Nile Sat) announced on Saturday the establishment of new Islamic channels, coinciding with the beginning of the Muslim holy month of Ramadan. (Via @EgyIndependent)

14:10 - The White House said it's not taking sides in Egypt at a National Security Council meeting on Saturday. Obama reiterated "that the United States is not aligned with, and does not support, any particular Egyptian political party or group".

14:00 - Magdy Wasfy, General Director of Subsidy Affairs at the Supply and Internal Trade Ministry, has said the gasoline crisis that recently disrupted the nation has been “90 percent resolved”.

13:45 - Egyptian security officials claim this morning that Islamic militants have bombed a natural gas pipeline to Jordan south of the city of el-Arish in Sinai.