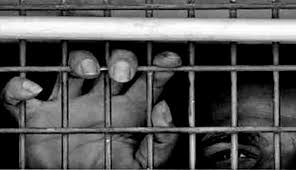 Despite the passing of a brand new constitution that is supposed to protect human rights, Egyptian prison's are still very far from meeting international standards. Recently, footage has been released shining a light on the dark, seedy conditions in an Egyptian maximum security jail. The footage that was given to The Telegraph is entitled Through the Keyhole, and is coupled with the cameraman's narration.

The video was captured by an inmate at the prison who showed the dank overcrowded “six feet long and 4.5 feet wide,” prison cells holding multiple inmates. The cells are equipped with a very tiny kitchenette adjacent to a squat down toilet. “This is supposed to be a solitary confinement cell...I do not understand how three people can sleep in here,” the narrator adds.

The Telegraph also presented another video confession of an anonymous inmate who details the constant abuse and torture he underwent behind bars. “Throughout those four days they beat me, electrocuted me, they tortured me in ways I can’t describe,” he tells the camera adding that, “they started making me memorise confessions, they told me: you’re going to have to stand before someone and say what we tell you word for word’... Because of all this torture and the threats they made, I told them: ‘I will say whatever you want’.”

Such practices by prison authorities can amount to “crimes against humanity,” explains Sarah Leah Whitson, of the Human Rights Watch’s Middle East and North Africa director.

“With thousands arbitrarily arrested and locked up in pretrial detention for months on end, Egyptian prisons appear to be bursting at the seams and more and more accounts are emerging of overcrowding, abhorrent conditions, and police abuse and torture,” Whitson told Al Arabiya News.

At the end of the day, torture in Egyptian prisons isn't really breaking news. Guards have been trained in torture techniques for decades and, as always, old habits die hard. What is new about this mistreatment is that the state has a brand new constitution to hide behind. But the constitution requires more than simply words, they need to be back by actions, and until enough global pressure is placed on Egypt, then one can assume that prison conditions will continue to deteriorate while Human rights abuses continue to rise.