Twitter is ablaze with backlash after a Liverpool FC posted a photo of two Muslim fans praying. 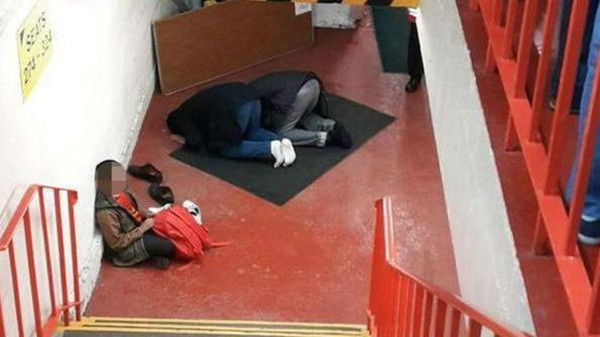 Anger on social media has reached fever pitch after a Liverpool FC fan took a picture of two Muslims praying and calling them a ‘disgrace.’

The ignorant ass responsible for this disgusting post goes by the name of Stephen Dodd. The offensive captioned photo was taken during the half time of last Sunday’s quarterfinal goalless draw with the Blackburn Rovers.

Muslims praying at half time at the match yesterday #DISGRACEpic.twitter.com/6sl8bZHnAY

Immediately after posting the picture, swarms of angry Twitter users began rightly shaming Dodd calling him an idiot and bigot, among other names. Adding more insult to injury is the fact that Dodd is a Liverpool supporter who have two Muslim players on their roster, Emre Can and Kolo Toure, as Twitter users pointed out.

Surprisingly, the majority of the angry tweets are not from Muslims or Arabs, but rather from Brits concerned with the rising tide of Islamophobia. Racism and discrimination continues to mar the world’s number one sport, but thankfully in this case there seems to be more people coming to defense of Muslims then attacking them.

What is wrong with Muslims praying at half time?! It's only a #DISGRACE if you see issue with it http://t.co/44jokl1vcl

whys it disgraceful? Several liverpool players are Muslims and pray before and during the game?? Dick

Sad that there are liverpool fans like this, funny how one of our best players is Muslim.. #lfc pic.twitter.com/ICVt8Zwhod

Liverpool have Muslim players, no? What a simpleton #prt