Just how did this 5,000-year-old artefact from the Great Pyramid of Giza end up in a cigar box at the University of Aberdeen in Scotland? 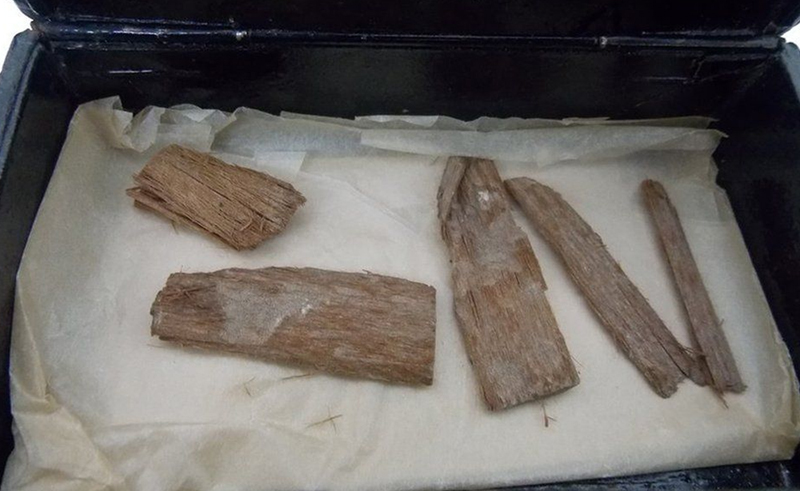 The tragic truth about archaeology is that we've lost a lot more than we've found. Ancient Egyptian artefacts have been lost to the winds, buried beneath sands, worn down by time, and scattered across the globe. But we never stop finding them, even if it's in the most unexpected of places. Like a cigar box in Scotland, for example. Like, excuse us, how?

Originally unearthed in the Great Pyramid's Queen Chamber in 1872, a 5,000-year-old length of cedar was one of the only three items that were known to have been removed from the Great Pyramid of Giza, along with a ball and a bronze hook. In 1946, the wood was donated to the University of Aberdeen, but had been lost ever since. It made it as far as the University's records and then just, poof, disappeared. They were lost to the ages. But not lost, as it turned out, to Egyptian archaeologist Abeer Eladany, who was reviewing entries in the Asia section of the archives when she noticed a misfiled cigar box emblazoned with an older flag of her home country.

“Once I looked into the numbers in our Egypt records, I instantly knew what it was, and that it had effectively been hidden in plain sight in the wrong collection,” Eladany said. “I’m an archaeologist and have worked on digs in Egypt but I never imagined it would be here in northeast Scotland that I’d find something so important to the heritage of my own country.”

Carbon dating confirms that the wood fragments date between 3341 and 3094 BC, about 500 years before the Pyramids were built. "The carbon dating has also been quite a revelation,” Neil Curtis, head of museums and special collections at the University of Aberdeen, said. “It is even older than we had imagined.”

The wood was believed to have been used to make measurements during the Pyramids' construction, but discovering its age raised new questions. Did the Ancient Egyptians place an antique to symbolically link Khufu with the past, as New Kingdom Egyptians did after them? Did someone misplace their favourite ruler, only for it to be misplaced again millenia later? Whatever the case, we're just glad no one smoked them.